Starting May 1, Thailand has lifted all COVID-19 testing and is reopened for fully vaccinated international tourists. A perennially popular destination such as Phuket is expected to see new waves of international travelers flying in, which will no doubt bring a much-needed economic boost to the so-called “Pearl of Andaman”. The island-province’s moniker isn’t just a reference to its picturesque location in the Andaman Sea, but also to its beautiful natural landscapes. With its powdery beaches and turquoise waters, Phuket sits comfortably among the world’s top destinations.

Aside from its magnificent nature, Phuket is also culturally rich, with diverse influences from ethnic tribes, navigators, and foreign merchants who came to the Phuket during the Ayutthaya period. Simply put, Phuket is a melting pot – and batik is one if its many treasures. 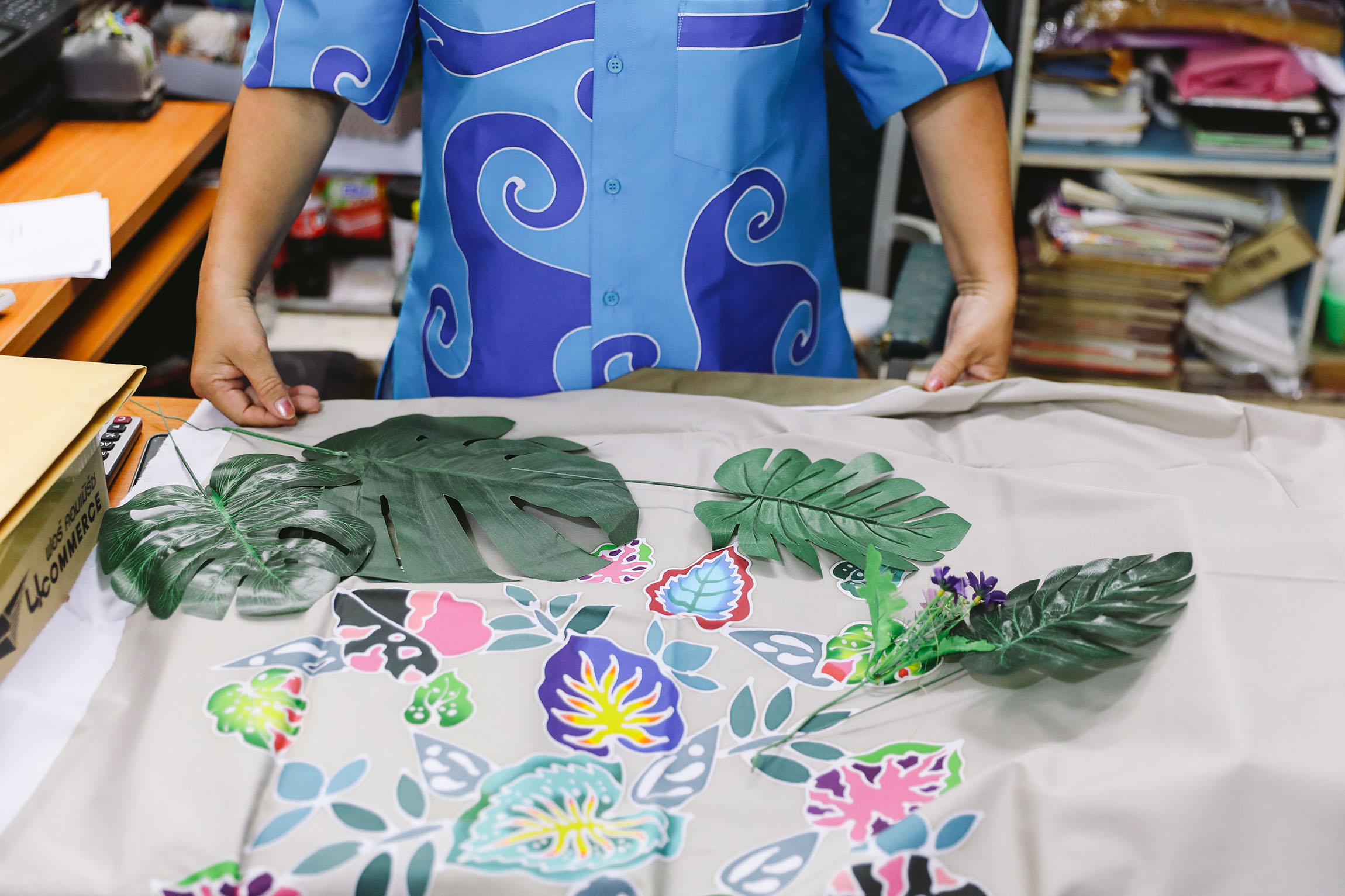 Patcharee “Piew” Sangjan, 62, is a pensioner. But even before she retired from the Office of the Non-Formal and Informal Education as a senior-professional-level supervisor, she pioneered the art of batik-making in Phuket. Born in Nakhon Si Thammarat, she has had a passion for painting since she was a kindergartener, and eventually enrolled in the Nakhon Si Thammarat Art and Craft College. To pursue higher education, she headed to Bangkok for an undergraduate program at Poh-Chang College (today known as Poh-Chang Academy of Arts), which is Thailand’s leading educational arts and crafts institute. Majoring in tie-dye and weave-dye arts there, Patcharee has for decades been building up her deep batik knowledge.

A Javanese term, batik refers to an iconic style of fabric made from wax-resist dyeing, where wax is “drawn” in elaborate patterns over fabric. The fabric is then dyed, creating beautiful motifs on the finished product when the wax is removed. Though Thai batik is believed to have its roots in Indonesian and Malaysia crafts, Thai batik makers have injected their local identity and culture into their work. Thanks to their efforts, Thai batik has a unique charm all its own. 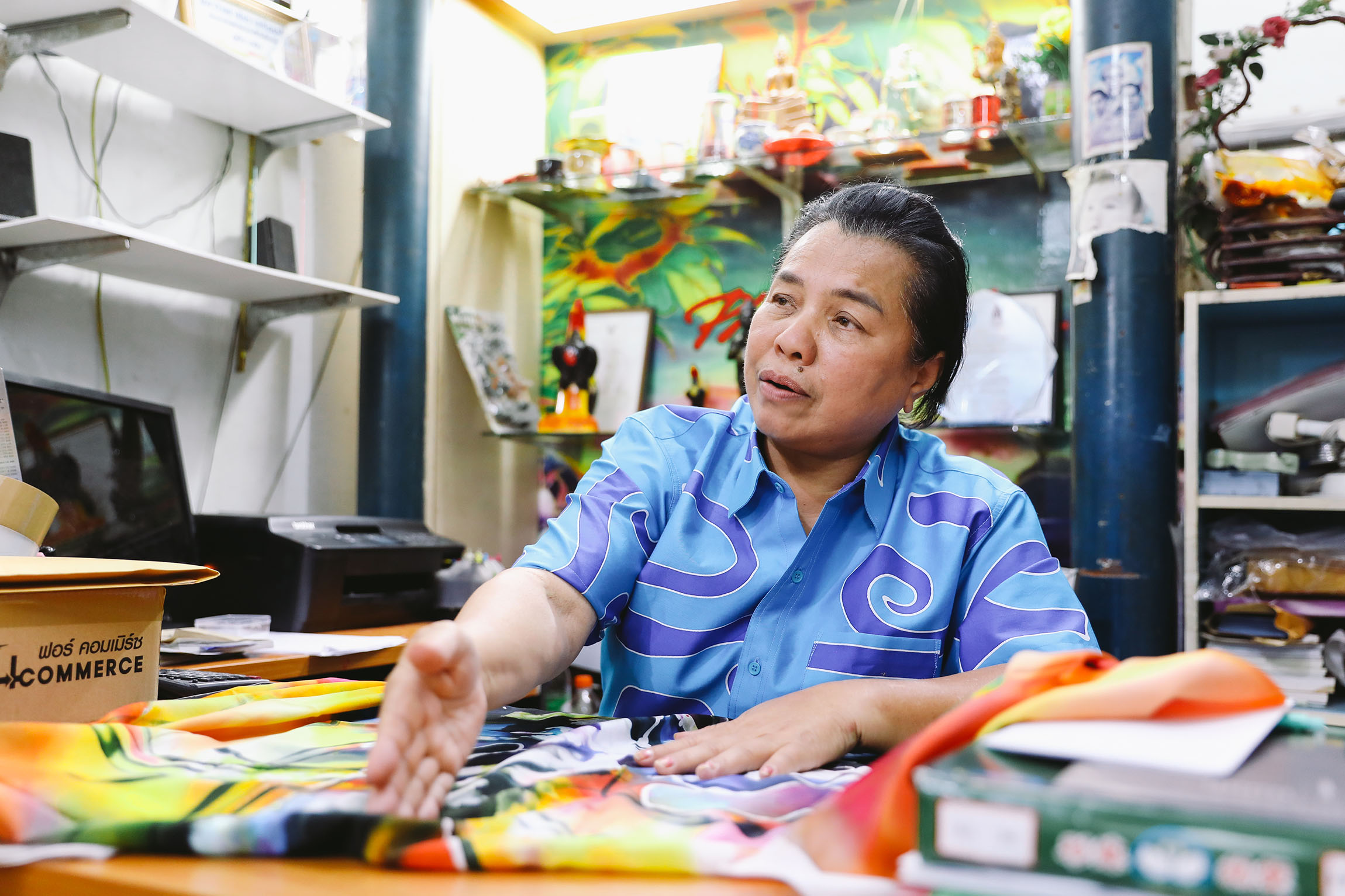 After Patcharee graduated from Poh-Chang College, she successfully passed an exam to become a civil servant under the Office of Non-Formal and Informal Education. She went on to be positioned in many southern provinces before finally settling down in Phuket. When she first came to the province in 1992, 30 years ago, batik was little known. Patcharee thus partnered with Chuchart Rawijan of Phuket Teacher College (known today as Phuket Rajabhat University) to develop a decorative batik course that eventually expanded to various institutes across Thailand.

In response to the Office of Non-Formal and Informal Education’s goal of developing vocational skills, Patcharee began teaching batik art to local people in Phuket. These students were mostly farmers, rubber tappers and fishermen who had pockets of free time for the new training. Each of them spent 100 hours to complete Patcharee’s course.

After they finished their training, Patcharee found that her students had created many batik products but had no avenues to sell them. She thus agreed to bring the handicrafts to Phuket Batik, a boutique then located within the tour company office where her husband worked.

“Would you believe me? In the beginning, locals could hardly sell any of their batik. But when these batik products were presented to tourists, they were sold out in three days,” Patcharee said about doing business during Phuket’s first big tourism boom. “Supply could not meet demand at all, since batik is handmade, and it takes a few days to create such products.”

Over time, Patcharee helped her group develop new products in response to the needs of each tourist group. For instance, Koreans seemed to favor neatly sewn batik scarves while Europeans appreciated batik shawls. Chinese tourists, on the other hand, purchased a lot of batik t-shirts.

With high demand from tourists, some locals started forming their own groups. Several community enterprises were established to facilitate batik production and distribution. Nevertheless, many makers continued to ask Phuket Batik to help sell their products through consignment arrangements.

Patcharee explained that batik has a relatively high production cost. Batik colors cost between 1,800 baht and 2,000 baht per kilo. Makers also need various other materials for the production, such as fabric, wooden frames, tjanting pens, electric ovens and wax. In the past, makers usually limited themselves to thin natural fabrics such as cotton, muslin and silk because they were readily compatible with wax-resist dying.

That practice began to change when then-Phuket governor (Mr. Chadej Insawang), in line with his policy to promote livelihoods in his province, required civil servants to wear batik to work every Friday. Patcharee took up the mission of designing the uniform based on a “Sea and Bougainvillea” concept. Phuket, famous for its beautiful sea, has bougainvillea as its official flower.

As part of this project, Patcharee also experimented with new types of fabrics. After she successfully applied wax-resist dyeing techniques to popular textiles like cotton-polyester and rayon, she won fantastic response from the market. The feedback was far beyond her expectations.

“The challenging part of batik making is drawing. You need to have a still hand to create a beautiful pattern. If your hand is not steady, the line will be shaky and poor in quality. Coloring is also an important part, which depends a lot on the imagination of each artist. Thai batik art is special in that it deploys shading. When compared with Indonesian batik that sticks with traditional method of tie-dyeing, Thai batik has a more appealing dimension,” Patcharee commented.

In her view, each Thai batik piece is a unique handicraft. Its patterns draw inspiration from the beautiful elements of nature such as waves, cliffs and flowers.

“When I went diving, I painted what I saw on my batik pieces. When Phuket’s sunset sky with color gradient appeared on batik, it proved a favorite among foreigners. I also created trendy graffiti designs on my batik products, which impressed young people quite a lot,” the retired civil servant said with a smile.

According to the Ministry of Tourism and Sports, Phuket attracted up to 10 million international tourists in 2019, which is the year before COVID-19 started spreading in Thailand. In that year alone, tourism generated more than 470 billion baht for the province.

Phuket’s batik industry, which had risen on the wave of the tourism boom, stumbled during the COVID-19 crisis, as the number of tourists in Phuket fell to “virtually zero” and Thailand closed border crossings and implemented strict measures for public-health security. To combat this unprecedented disruption, Patcharee boldly went online.

“At first, I relied on my daughter. She created social media pages for me and taught me how to produce content and place ads. While that helped somewhat, I could not do much online back then. Our IT knowledge levels were different. There was also an age gap. So I didn’t learn much from her,” 62-year-old Patcharee recalled.

“Then one day, I saw an advertisement about dtac Net for Living’s scheme for senior entrepreneurs. I sent an application and was allowed to sit in a training course that comprehensively addressed the needs of budding online entrepreneurs. This course has taught me about interesting content, product presentation and photography. Before the course, I did very basic stuff. When taking pictures of my products, I would just place them on the floor and snap. But the young trainers patiently explained to me again and again to ensure I understood the gist of what I should be doing,” Patcharee said.

These days, she even produces content on the beach with her grandchildren waving colorful batik before the camera and Phuket’s signature blue sea in the background. These creative content techniques have not only colored up her social media pages, they have also boosted her online sales.

“Fortunately, online platforms have kept my business alive. Although sales are not as huge as during the tourism boom, I am not running out of cash. Better still, thanks to the dtac Net for Living course, I have learned new things and kept pace with the changing world. Today, even Phuket residents order my products online,” Patcharee said. “And now we are looking forward to the country reopening and to welcoming tourists back.”

If you are interested in getting beautiful, ready-to-use batik products or creating a bespoke batik pattern for your piece, contact Patcharee via

How one former prisoner is changing lives with her online bakery