Prison overcrowding has been a significant issue in Thailand, with the number of prisoners rising from 150,000 in 2006 to 366,000 in 2018.  However, in recent years, the judicial system has made progress and the number has since decreased to 285,000. This success can be partially attributed to the promotion of social partnerships and the implementation of restorative justice by the Thailand Institute of Justice (TIJ).

Thanachai Sundaravej is one of the key people driving the promotion of social partnerships and the adoption of restorative justice at the TIJ. He currently serves as the Senior Manager for Social Partnership and Public Engagement at TIJ’s Office of the Bangkok Rules and Treatment of Offenders (OBR). 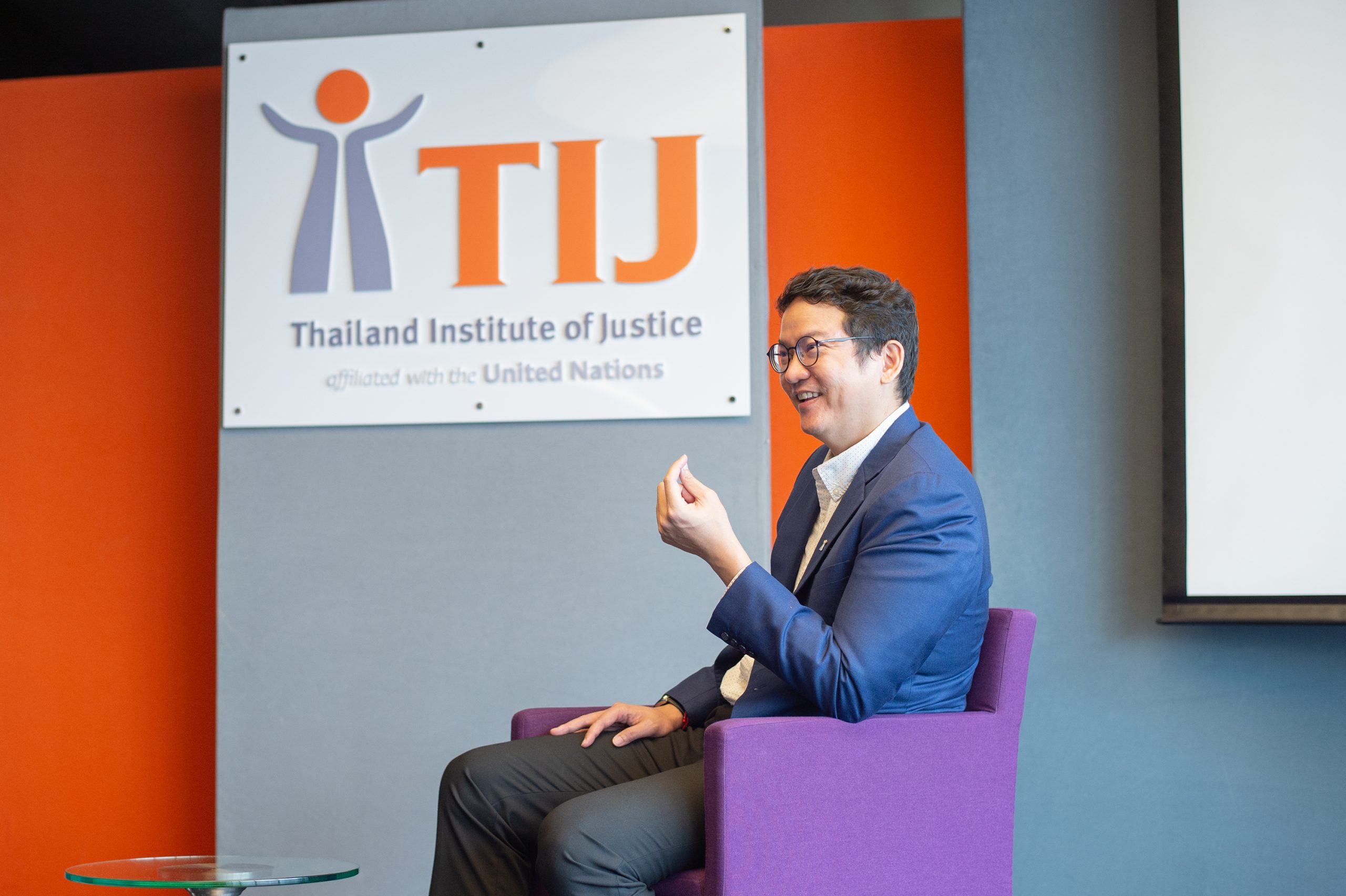 Mr. Thanachai has a long history of working with children and youth. In 2007, he founded Cloud Book Publishing, a company that produces children’s literature. Mr. Thanachai was inspired to become a storyteller by his own son and has also written children’s books himself.

His career as a storyteller reached a turning point when he visited Ban Kanchanapisek Training Center for Youth for an educational purpose. The center is under the supervision of its director, Ticha na Nakorn, and serves as a model facility for the social reintegration of young offenders. Even though the young offenders at Ban Kanchanapisek have committed serious offenses, their recidivism rate is as low as three percent.

“I used to question whether this facility could really change the lives of young people who had committed serious offenses,” Mr. Thanachai said.

In 2019, Mr. Thanachai enrolled in the Rule of Law Development Program (RoLD) at the TIJ. As part of this program, he had the opportunity to return to Ban Kanchanapisek Training Center for Youth to learn about its management and facility administration. 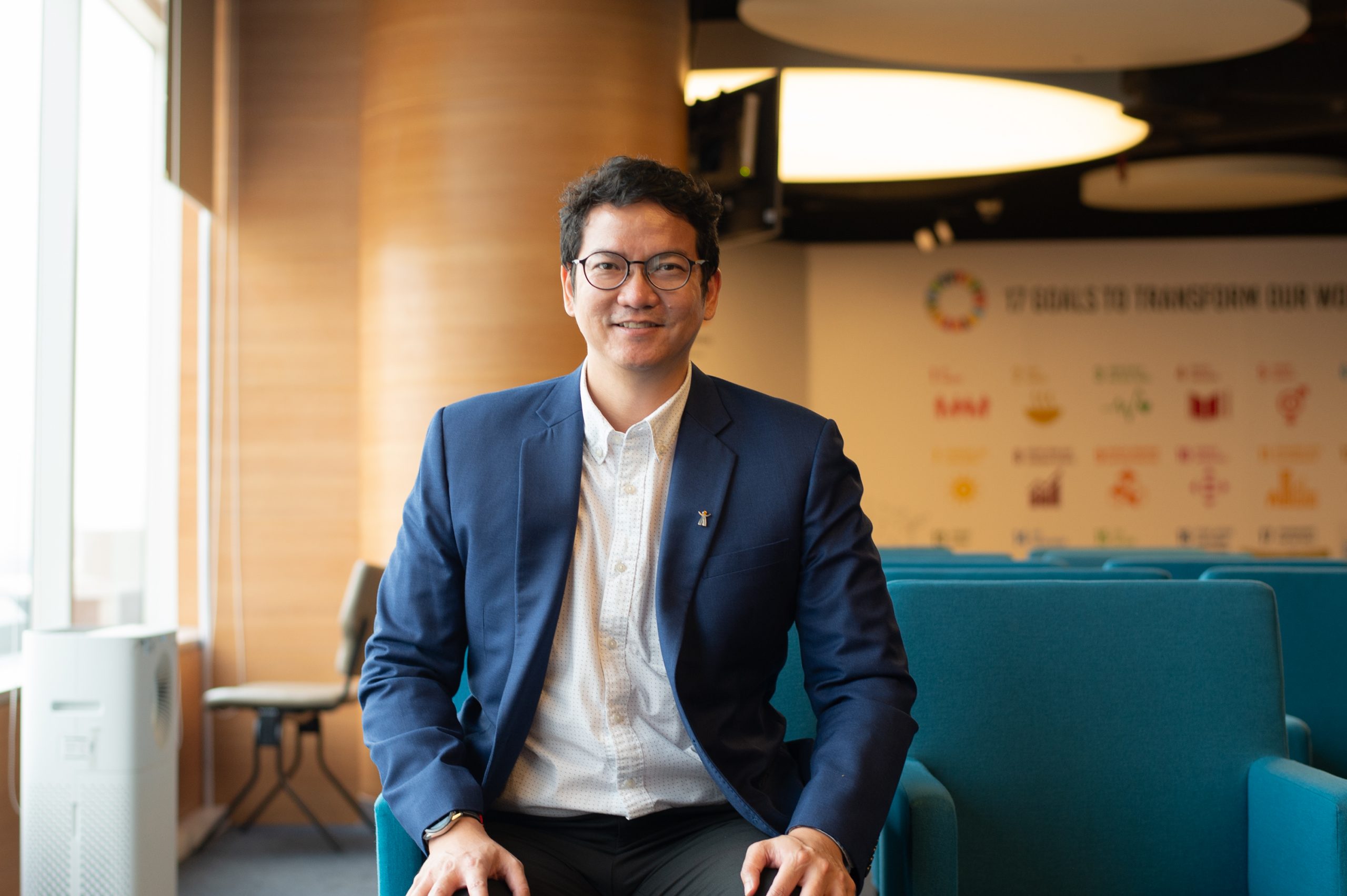 As a lay judge at the Central Juvenile and Family Court, Mr. Thanachai has observed common characteristics among young criminals. Many of them have family issues, such as being abandoned by their parents or witnessing their parents’ drug abuse and incarceration. These issues can have negative impacts on their education and physical development due to malnutrition. To better understand the challenges faced by young people in these situations, he made a visit to Rayong Child Welfare Protection Center. There, he met several malnourished children and older kids with poor reading skills.

“These kids were not ‘bad’,” he added. “They just needed support, encouragement, guidance, and someone to listen to them.”

After analyzing root causes of the problems faced by young offenders, Mr. Thanachai volunteered to help enhance their potential through the power of storytelling. He began by building relationships with them through icebreaking activities.

“I started with organizing monthly storytelling events by myself,” he recalled. “The events grew from monthly to weekly. Eventually I had more people joining me, and the activities now include meditation and writing workshops.”

Over time, Mr. Thanachai noticed that the young offenders he worked with began to show positive changes in their behavior. They became more expressive and demonstrated improved reading and writing skills. He also discovered that some of these young people had hidden talents, such as sports.

Through his storytelling and other activities, Mr. Thanachai was able to inspire and motivate the children to pursue their goals, even helping some of them earn scholarships to study in Bangkok.

In 2020, Mr. Thanachai started working at the TIJ as a senior manager for Social Partnership and Public Engagement.

“At TIJ, I have been given opportunities to serve children and youth on a larger scale and have come to understand the interconnectedness of all things,” he said.

In his opinion, the current justice system still has weaknesses when it comes to helping formerly incarcerated persons reintegrate into society. Many skills that they learn while in detention are not necessarily applicable to the outside world.

This is why Mr. Thanachai decided to work with dtac in order to introduce dtac Net for Living’s training program to young people under the care of the Central Juvenile and Family Court, the Ban Sirindhorn Training Center for Boys, and Ban Pranee Training Center for Girls. Pol. Lt. Colonel Wannapong Kotcharag, the director-general of the Department of Juvenile Observation and Protection Center, has also actively supported the program. And in November 2022, the Department of Juvenile Observation and Protection (DJOP) and dtac signed a memorandum of understanding on developing digital skills for future career opportunities and skills to safeguard against online risks for youths under Thailand’s criminal justice system.

According to Mr. Thanachai, social-partnership development is a strategic contribution to improving the judicial process. It comprises of three steps: having a good start, employment after prison, and reducing reoffending.

“Having a good start” is an important step in the social reintegration process of former offenders. In this step, it is necessary to put special attention on those without family to return to after their release, as recidivism rates tend to be higher among this group. In this case, the House of Blessing Foundation serves as a model for a halfway house, with facilities that offer transitional opportunities for former prisoners who are attempting to return to society but lack family support. During the first three to six months after their release, the foundation will help them work on their mindset and personality and provide necessary education and upskilling.

“Employment after prison” is also a key to reduce recidivism rates among former prisoners. After their release, former prisoners need to be able to find and maintain a job or have access to financial means or tools to start a living. The longer they stay unemployed, the higher the chance they will reoffend. So, all parties involved need to act fast to reach out to those who have just been released from prison.

Based on this, it is clear that “reducing reoffending” will be possible only if the government sector, the private sector, and civil society work together. The TIJ has fostered four groups of social partnerships: Innovation Group; Seed Money Group; Know-How Group, and Support Group, with the TIJ acting as the connector that creates scale-up opportunities.

“Punishment is not an answer. In a judicial process, the solution should be about giving opportunities for former prisoners to repent and change for the better in order to reestablish themselves in the society as a quality citizen,” Mr. Thanachai explained.

For Mr. Thanachai, doing what he loves gives him happiness, but doing something for others is the meaning of life. And working with children and youth at the TIJ has brought him joy and helped him find a meaning in life.