7 September 2022 – People across Asia are united by a firm belief that connectivity empowers them with more economic opportunity, daily convenience, and greater access to essential services, according to Telenor Asia’s new “Digital Lives Decoded” study.

The study, released in conjunction with Telenor’s 25th anniversary in Asia, surveyed over 8,000 mobile internet users across eight countries (Bangladesh, Indonesia, Malaysia, Pakistan, Philippines, Singapore, Thailand, Vietnam) in South and Southeast Asia. The survey revealed a common appreciation for the benefits of an “always-on” life, where mobile connectivity enriches relationships and delivers convenience and makes it easier for people to participate in the digital economy.

A resounding 93% of respondents believe their mobile usage improves their quality of life. Overall, women lead this trend with 63% saying quality of life is significantly enhanced compared to 52% of men. This trend is most apparent in Thailand (75%) and Indonesia (71%), where the highest number of women are connecting to “significantly better” lives through their mobile use.

“It is often reported that mobile usage comes between people, distracting users from those around them and damaging relationships and interpersonal communication skills. However, this study dispels that notion. Compared to before the pandemic, mobile data usage has more than doubled in most Asian markets, reshaping how we communicate at work and at home. Interestingly, this survey shows that people want the changes in digital use and their daily lives to stay. In fact, they continue to immerse themselves in a digital world despite rules on travel and social interaction being relaxed,” said Jørgen Rostrup, Head of Telenor Asia.

As connectivity puts power into the hands of people, this study also revealed where digital gaps remain, particularly in rural and elderly populations. With mobile connectivity evolving from a nice-to-have to a must-have, the need to understand these gaps is becoming more important to policymakers, businesses, and individuals alike. Insights from this study can thus act as a map of where to bridge the widest digital divides,” he added.

1. Swiping up for an always-on lifestyle

People in the Philippines and Thailand are most dependent on their mobile phones, with 29% and 25% respectively saying they are never without their mobile phones. This dependence is set to grow, with nearly three in four people (74%) expecting their mobile usage to increase in the coming years, a trend greatest among respondents in Thailand (82%).

2. Keeping up as digital life charges ahead

Generational differences in how people feel about the surge in time spent online are apparent. Gen Z respondents, the youngest surveyed, are more likely to feel that they are overusing technology. Along with their millennial counterparts, Gen Z respondents were also the most concerned about having the right skills to keep pace with technology. This was a concern shared across all generations, with 85% of respondents worried that their digital skills will not keep pace with a rapidly evolving digital environment. Of the countries surveyed, Thailand was the least concerned (63% of respondents).

3. (Lack of) trust in the digital world

Concerns around privacy and security of mobile devices across the region have surfaced for 93% of respondents across the region, amid a well-recognised surge in digital adoption. Of those who reduced their mobile usage in the past year, one in three Gen Z respondents in Malaysia cited privacy and security concerns as the top reason for the decrease. Conversely, people in Thailand were least concerned, with nearly a quarter of respondents (27%) not concerned about this at all.

4. Tapping into a more sustainable life

The study also reveals optimism about the potential for mobile technology to advance environmental sustainability. Three-quarters of those surveyed believe that digital access is “very important” for them to lead greener lives in the future. However, that share was lowest in Thailand (63%), Malaysia (57%) and Singapore (41%).

People cited the greatest benefits come in the areas of reducing paper, waste, and electricity (70% of respondents), being able to communicate more efficiently (67%) and providing better access to public transport with more information (55%).

The study also points to the greater potential women see in mobile usage, with more women than men saying mobile connectivity has enhanced their options for working and generating income and gave them better access to information and education opportunities. This was particularly true in Thailand, where three quarters (75%) of women say mobile usage improves their lives, versus half (49%) of men.

Respondents also recognize how mobile connectivity is inclusive, giving people greater access to essential services which enrich their daily lives, such as education (88%) and healthcare services (88%).

However, it is around financial inclusion where mobile devices are really levelling the playing field. 92% of respondents say having a mobile device has increased their access to financial services while more than half (57%) believe their access to financial services has “significantly improved”. It is also worth noting the disparity between responses of those living in cities (60%) and rural areas (50%), which highlights the ongoing need to broaden the reach of these services to those outside urban areas.

“As mobile connectivity becomes even more fundamental to our daily lives, lacking the right skills and awareness, including to navigate safety and privacy issues, or being off the grid can severely restrict access to education, healthcare, economic and employment opportunities. We need to better understand digital gaps, and how to bridge them, as well as the carbon footprint of our online habits, as we work together to create a future where mobile connectivity is empowering and sustainable for all,” said Mr. Rostrup. 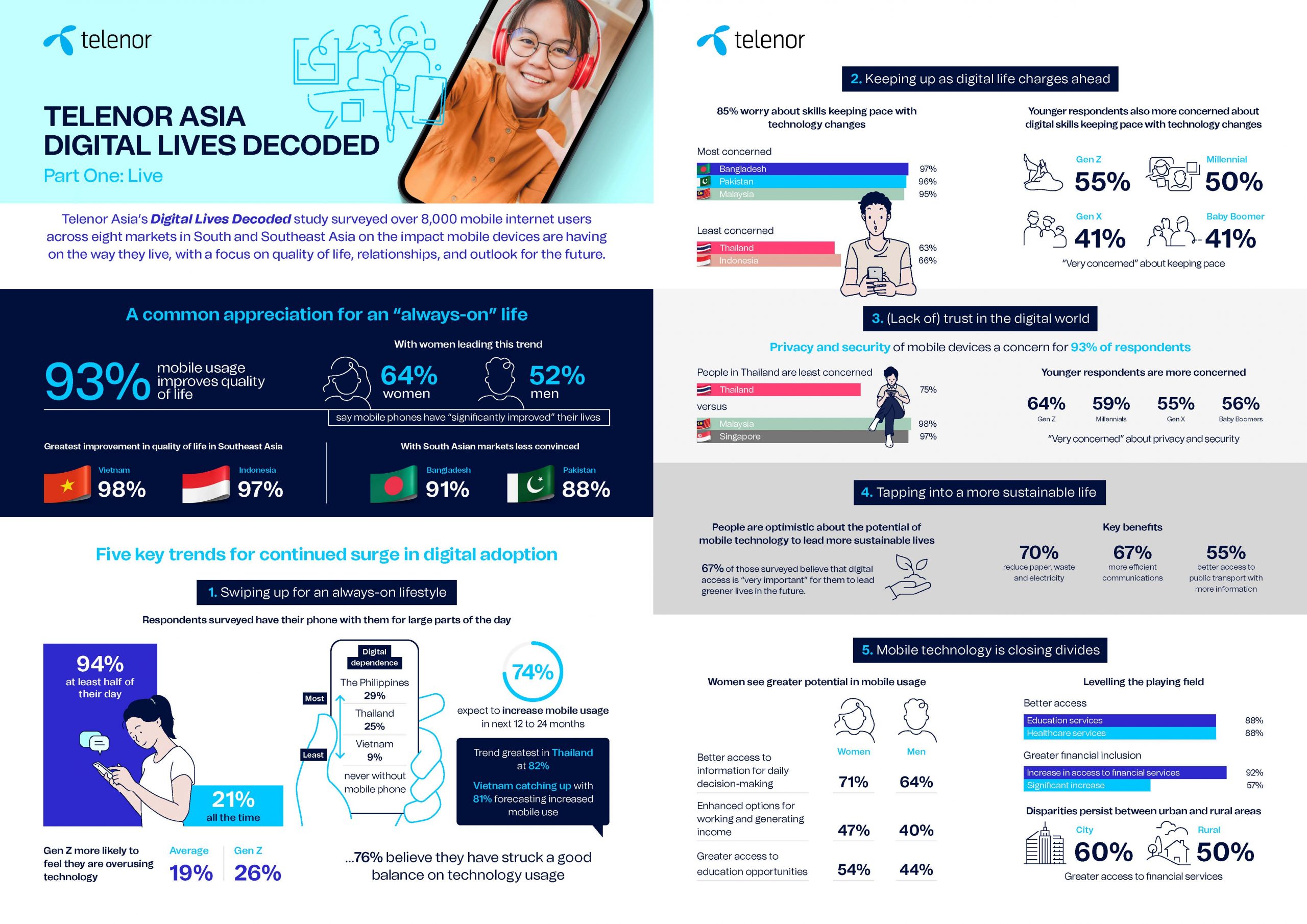 Telenor Asia’s “Digital Lives Decoded” study is a three-part series looking at the role of mobile relationships in how we live, work, and play. The first report examines the role and impact mobile phones are having on the way people live, with a focus on quality of life, relationships, access and inclusion, and outlook for the future.

Telenor is a leading global telecommunications company, serving 172 million customers in the Nordics and Asia (Q1 22). In Asia, we have been connecting people to what matters most for 25 years. We are committed to supporting the national digital ambitions of the Asia markets we operate in, driven by the ambition of empowering societies. Telenor is listed on the Oslo Stock Exchange under the ticker TEL. For more information, see www.telenor.com/asia