Thailand has a long history of promoting “domestic tourism”.  During the 1997 Financial Crisis and Bird Flu Crisis, Thais were seriously encouraged to explore Thai destinations.  In the wake of COVID-19 pandemic, the government has also promoted domestic tourism via the “Rao Tiao Duai Kan” (We Travel Together) scheme. 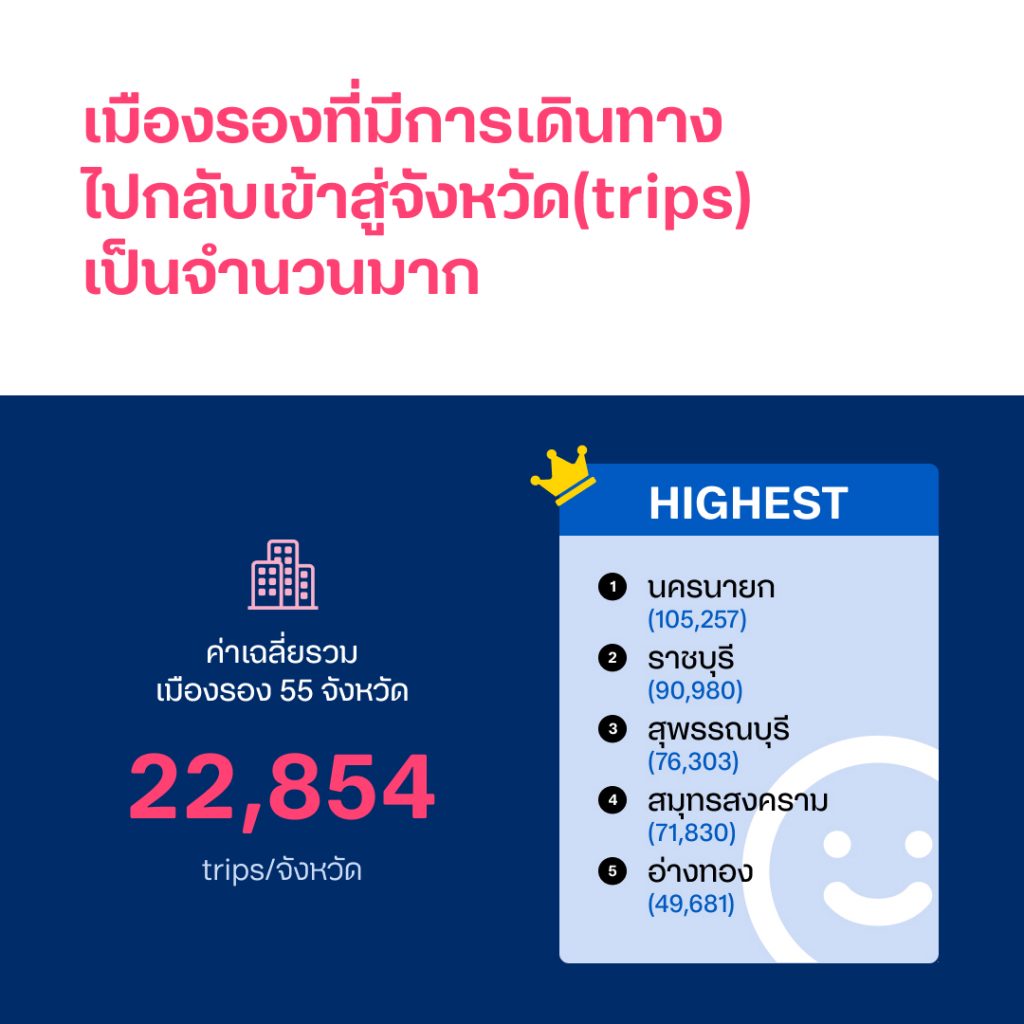 According to a study using mobility data on movement patterns and tourist concentrations during the Covid-19 pandemic, Thais managed to take day trips averaging approximately 150 kilometers. On one hand, tourists from neighboring provinces of Lamphun, Chiang Rai and Nakhon Si Thammarat made 40-60% of their total day trips to these provinces. On the other hand, only 14% of total day trips were made by tourists from neighboring province to other secondary provinces. Some provinces were able to attract tourists even though they required travelling as far as 200 kilometers, such as Mae Hong Son, Ranong, Nan, Phetchabun and Nakhon Phanom. In addition, other provinces were able to attract 3-5 times more day trippers than average, such as Nakhon Nayok, Ratchaburi, Suphanburi, Samut Songkhram and Ang Thong. 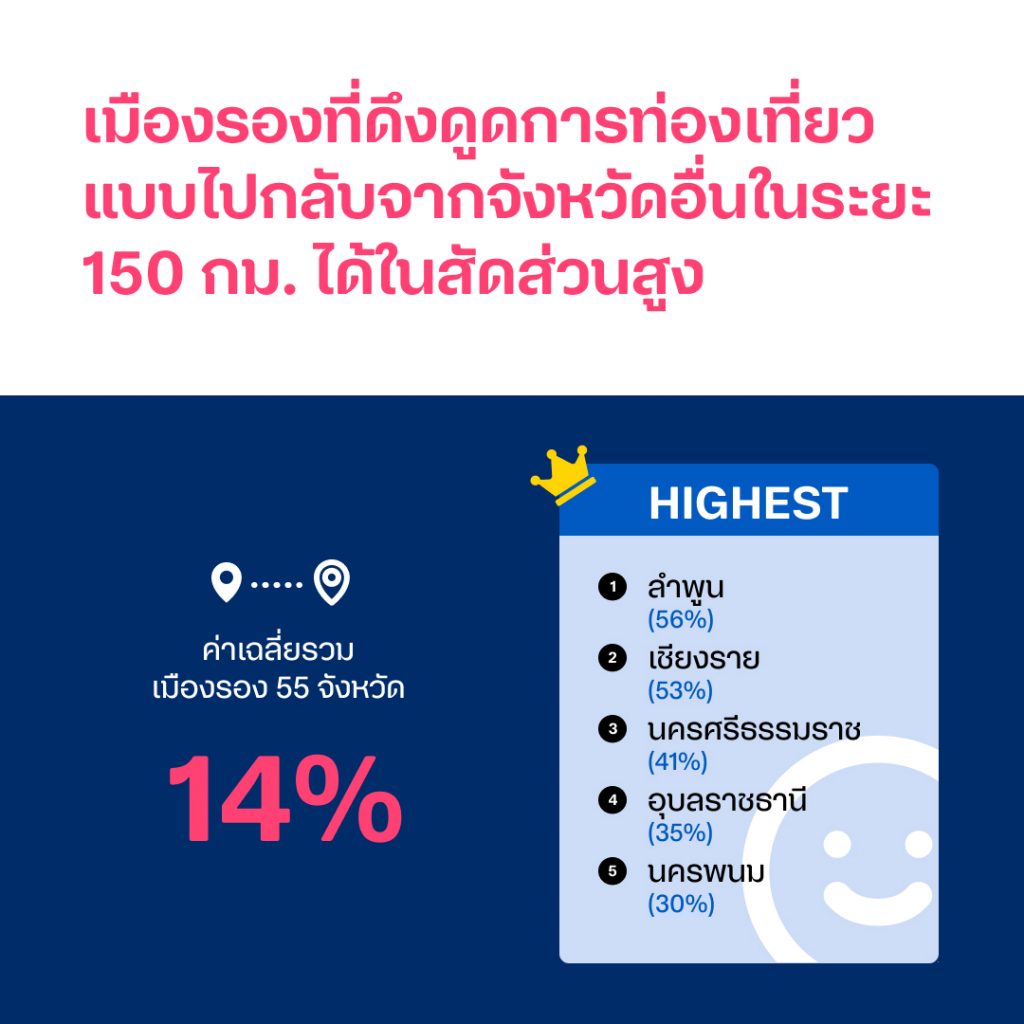 Asst. Prof. Dr. Nattapong Punnoi, a co-researcher in the study on movement patterns and concentration of Thai tourists based on mobility data during the COVID-19 Outbreak, said many countries place importance on day trips, as this traveling style helps boost local economies while encouraging creative economic development. Japan can be a model for promoting the day trip concept, which is coined as “micro-tourism”. It refers to a sightseeing and overnight travel within an hour or two of home (approximately 150 kilometers). This tourism concept emerged in Japan where local tourism contribution accounted for 60% of the country’s total tourism revenue. The Japanese government then leveraged the concept of “population exchange” as a means to boost local economies to handle the challenges of an aging society.

Since 2010, the Japanese, especially families, laborers and seniors, paid more attention on ‘learning-based tourism’ as the society started to care amore about “experiences”. Parents then started taking their kids to various nearby destinations so they could learn outside the classroom. Kids went fishing, farming, weaving baskets, and tried activities related to various local industries. During the same time, working-age Japanese also began expressing interests beyond career development and wanted to explore other things in life. As experiences become more important, learning-based tourism materialized.

“As Japanese people have fostered a learning society, the country’s tourism industry started preparing short trips for Japanese families. Holiday trips didn’t need to be long like three-day and two-night trip. A really short trip gave parents time to relax, while their kids could explore outside of classrooms and interact with locals. This triggered a micro-tourism model across local communities nationwide,” Nattapong said.

To ensure suppliers do not have to shoulder big costs, Japanese tourism rolled out its “Service Design” policy in 2000. Under this policy, tourist activities were created in the way that promoted tourists’ active participation in Japan’s economy.  Udon-cooking classes were an early example. Japan has a variety of rice and vegetables, and these different ingredients, when turned into Udon noodles and soups, give different tastes. As a result, each Japanese area has its own “Udon specialty”. Tourists are provided with ingredients and utensils as they step into Udon-making classes, and Japanese tourists travelled to various areas to taste such special dishes.

Micro-tourism has given birth to various tourist activities related to Japan’s economy that can easily take place over a day trip. Suitable for adult and elderly family members, they let participants look back into the past and take time to appreciate their food culture.

Micro-tourism brings other benefits to the towns they visit.  Today, tourists want a town that photographs well,  offers good meals and has interesting souvenirs that they can share with friends.

“The case study of Japan clearly shows that if domestic tourism is strong, the tourism industry will be more robust and provide support for local development, particularly during the Covid-19 outbreak, when people put health and wellness as their priority. Thus, tourism will become stronger and finally sustainable,” according to Nattapong, who is also responsible for the Design for Creative Economy Development Research Unit.

Looking at Japan’s tourism development as a model, Thailand has high potential to adopt micro-tourism as a strategy for wealth distribution across its rural provinces. The local authorities can promote domestic tourism by looking to their local farmers and entrepreneurs as a force to micro-tourism, encouraging their participation in tourism spheres in addition to their usual activities. They can use their existing assets – farmland and agricultural equipment – allowing tourists to join and learn from farming activities while possibly reducing their operational costs.

Thailand’s urban development has made a big leap over the past 15 years. Convenience stores, hotels, restaurants, communications systems, and social media have blossomed all around. Thanks to such development, both local tourism and local economies grew. Thailand’s tourism scene faces a major change in the future due to investment in double-track railways and high-speed trains, making travel more convenient and broadening the opportunities for those who do not own a car – the elderly, teenager, the disabled and foreign tourists – in particular. Those factors will accelerate the micro-tourism trend in Thailand.

In the post-Covid-19 environment, we witnessed a mass population exchange as many working age Thais migrated back to their town of birth thanks to a solid digital infrastructure, allowing them to work from anywhere. This is coined as the “U-Turn” phenomenon. Some have returned after graduation, while others returned because they are tired of city life or are looking for a new lifestyle. Thanks to such trends, many stylish hotels and chic eateries have popped up in secondary cities across Thailand. As the country recovers from the COVID-19 crisis, secondary cities have the potential to grow if they are promoted properl

“In my opinion, locals should take this opportunity to promote micro-tourism. However, it requires collaborative action from all involved parties to make it happen in the post Covid-19 environment as tourism demands are  growing rapidly thanks to the easing of travel restrictions. If Thailand can leverage tourism policies fitted for each province, there can be a boon for local economies and sustainable development,” Nattapong said, “Now is the ‘turning point’ to reshape Thai tourism and the grassroots economy”.

How to Maximize Capabilities of Mobility Data: Case Studies of Samut Songkhram and Phatthalung Provinces