Floods have been raging in Thailand’s Central region for nearly two months now. According to the National Water Command, accumulated rainfall has been 21 per cent higher than average during the period because of three storms: Mulan, Ma-On and Noru, plus low-pressure ridges. As the Chao Phraya River overflows, run-offs spread through its western fields to Chainat, Sing Buri, Angthong and Ayutthaya alike.

Kanokporn Thongprasert, a 56-year-old villager in Ayutthaya’s Paniad Klong Chang Community, told dtacblog that even though her community had been inundated every year, this time floods were more serious – even when compared with 2011 big floods. Now, floodwaters are about two metersdeep. In other words, the first floor of her house is completely swamped. Worse still, in previous years inundation used to subside within weeks. But this year, floods have persisted for about two months already.

“Floods are quite common in Ayutthaya. But during the past two years, floods have become a real crisis because the floodwater level is higher and floods drag on longer,” Kanokporn lamented. 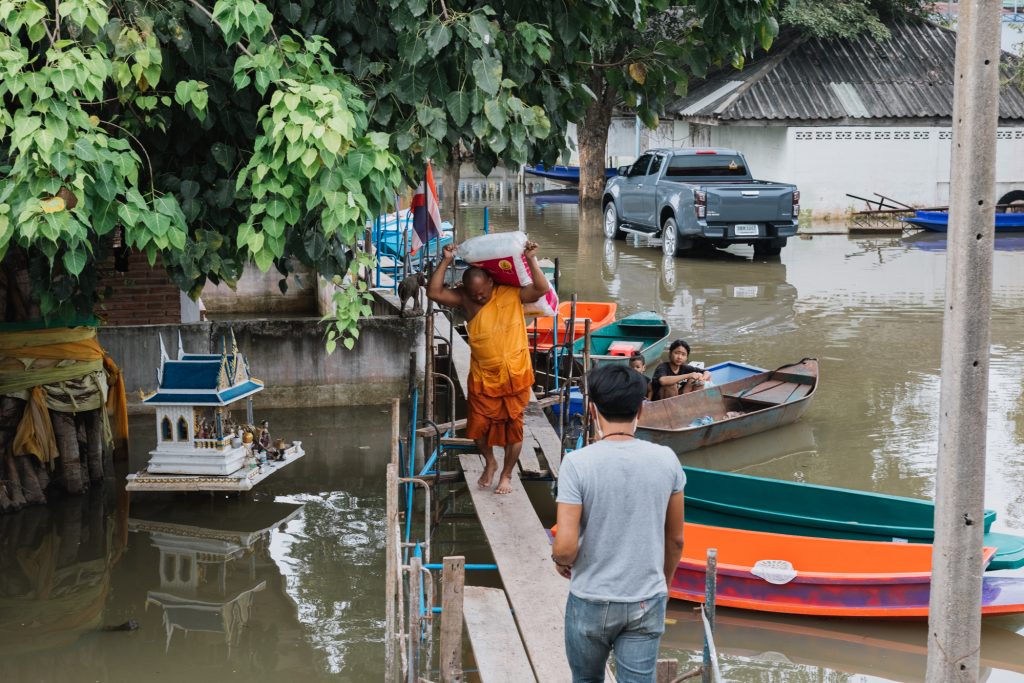 In the face of severer flooding, Kanokporn has lost her income. She usually works at Klang Klong Sa Bua Temple, which has received fewer financial donations lately. Monks cannot go out to collect morning alms either. At the same time, Kanokporn’s living expenses have gone higher.

Just as thousands of families like Kanokporn’s are struggling with floods, communications prove even more important. So, during this flood crisis, dtac engineers work harder to ensure that dtac’s flood-hit customers have reliable access to telecommunications. 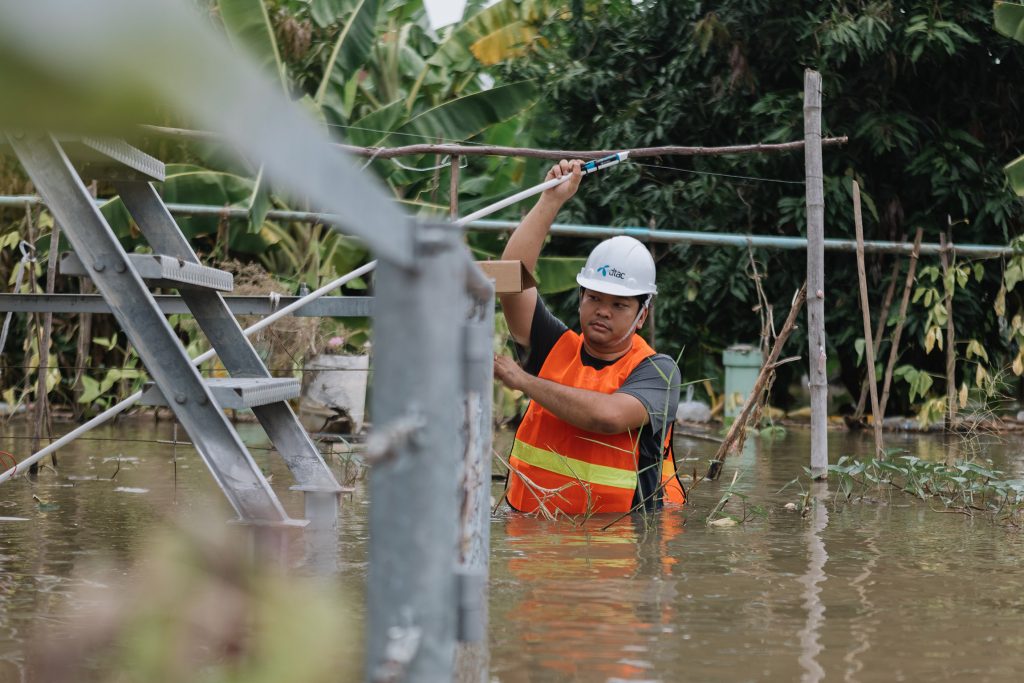 Flood Risks of Base Stations

Kittipong Kijsanayothin, Head of Field Service Operation Department at dtac, explained that “base stations” were crucial to the delivery of mobile/internet services. In normal situations, Routine Preventive Maintenance (RPM) is provided to such stations on a semi-annual basis. During each RPM session, engineers check that tools and equipment at base stations are still in good working condition. The station is also cleaned. Measures are put in place to prevent both thieves and animals from invading.

But in times of disasters, dtac engineers must monitor base stations more regularly, with  teams assigned to each disaster-hit area. For example, dtac engineers have inspected base stations in flood-ravaged zones to check floodwater levels and determine if floods will enter the stations and affect operations.

Each base station has three key components: 1) Signal Tower that transmits signal; 2) BTS (Base transceiver station) that controls signal-transmission equipment; and 3) MDB (Main Distribution Board) that manages the electrical system. In flood situations, dtac engineers pay serious attention to a base station’s BTS and MDB. If floodwaters reach BTS and MDB, the base station will become inoperable, and customers covered by that base station will not have access to mobile-phone or internet services.

Panupong Peyatsaphan, Head of Field Service Operation Central & East Unit that covers 19 provinces, said Thailand’s Central provinces are flood-prone. But this year, floodwater levels are seriously high even when compared with the big floods back in 2011. He was speaking just as his team inspected a base station in Ayutthaya’s Bang Ban district. Sitting just about 100 meters from Noi River, this base station is undeniably at risk of being flooded. So, dtac has decided to move its BTS and MDB to a higher spot.

“Electricity” is another fundamental part of a base station. Normally, dtac’s base stations have been directly powered by the electricity utilities. But if they need to cut electricity in flood-hit areas, dtac engineers will head to the affected stations with mobile power generators. If optical fiber of the stations is damaged, repairs are also done quickly.

Panupong added that it was very important to give base stations maintenance and/or repairs to ensure they could function well. If dtac detects any irregularity at its base stations, it will work alongside its two key partners, BBTec and Ericsson, in carrying out technical repairs / installations. Relevant data are also shared to facilitate operations. Moreover, BBTec compiles risk reports on optical fiber for dtac.

“In critical times like months-long floods, internet means very much to disaster victims. With floodwaters all around, they may have accidents, develop health problems, or get attacked by venomous animals. Snakes, in particular, often escape to dry homes from flooded zones. We therefore need to focus on preventative measures,” Panupong said.

At present, flooding has been critical in many Central provinces. In hard-hit areas, floodwaters are more than two meters deep and surround local base stations. Chaiyos Sittirach, who works in dtac’s network operation team, said ensuring that base stations are able to operate at such times usually creates “engineering challenges”. There is also no sure way to guarantee success because the team involved may need to go by boat to marooned base stations. Experiences of frontliners therefore means a lot. Animals often pose a threat to base stations’ operations. Small animals, for example, can sneak in and create nests inside an MDB. Snakes, meanwhile, often hide silently behind poles and invisible corners of base stations. They may become dangerous to staff entering the stations. It should also be noted that some base stations are located inside forest zones. Sometimes, engineers have to take a boat for one kilometer through banana or other overgrown trees to reach their destination. To prevent snakes and dangerous animals from falling into the boat or to thwart their attacks upon entering the station, dtac’s frontliners usually tap ahead to create sounds that can scare animals away.

“It becomes more difficult to maintain or repair base stations during floods. It is quite a struggle just to travel to the stations that are marooned by floodwaters. Sometimes, we need to go past water channels. Getting on and off boat itself is not easy. Something unimaginable may happen anytime,” Chaiyos said about the many challenges he has faced as a frontliner.

According to him, “community relations” are crucial to his work. Lately, Chainat’s floodwaters were so deep that base stations were not accessible by normal motor vehicles. Civil defense volunteers, however, stepped in to help with their off-road vehicles. As a result, the dtac team could access base stations for proper maintenance.

“We are well aware that communications have crucial importance during a crisis like the current flood crisis. We are proud that we play a role in making life easier for disaster victims. Our executives’ visit is a boost to our morale,” the frontliner revealed.

dtac On Guard Against Possible Network Outages Due to Floods