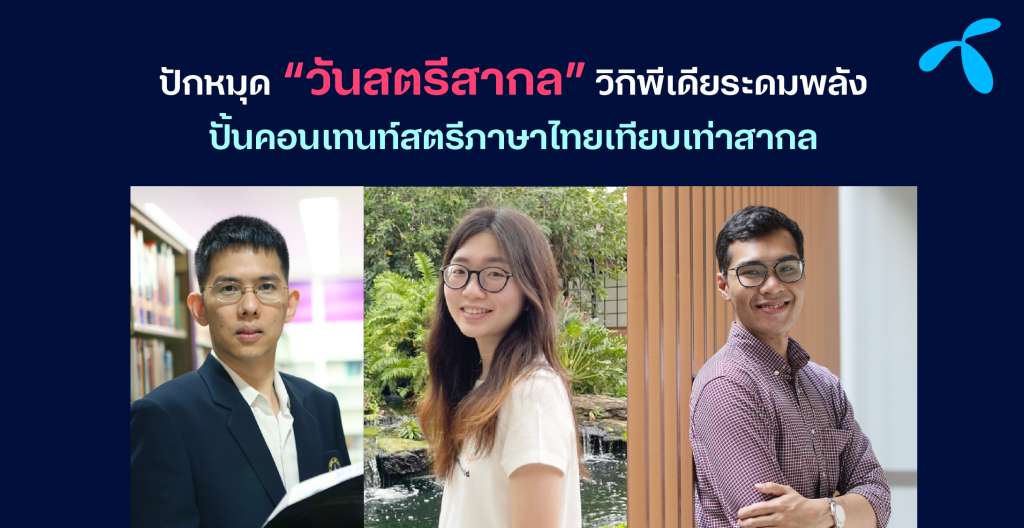 Although the world’s population is comprised of more women than men, a gender imbalance in digital content exists. In fact, content for women and from female content creators is significantly less than their male counterparts.

According to Dr. Athikhun Suwannakhan, President of Wikimedia Thailand, an International Women’s Day event (IWD), hosted on March 8 reflected the challenges faced by Wikipedia in correcting the gender imbalance around the world. Over 80% of content editors are male, thus resulting in biased content with a male-centric perspective. 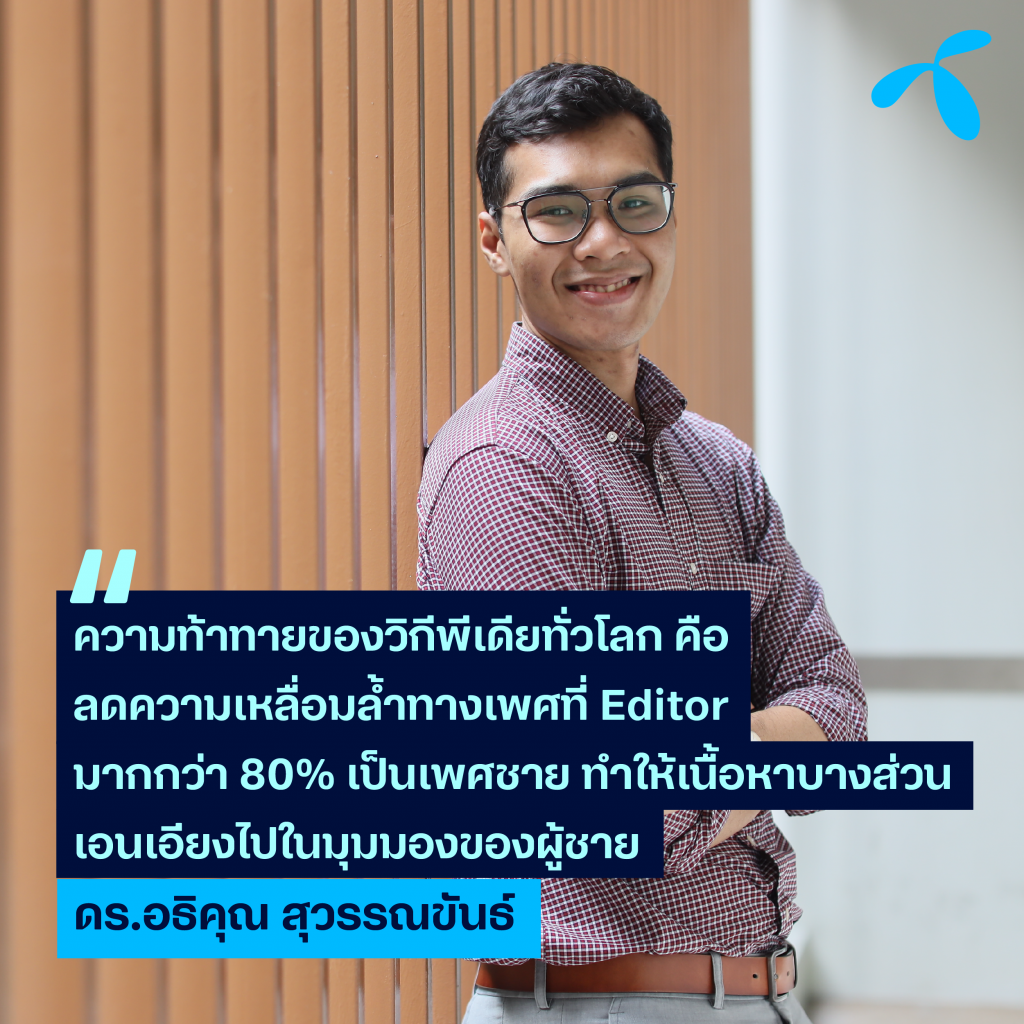 For instance, in Spain and Italy, content refers to women as the “wives” of men. This could convey the idea that men are “the owners” of their wives. Consequently, this implies that men are superior to women.

The Wikimedia Foundation, in partnership with UNESCO in Thailand held an edit-a-thon on International Women’s Day in 2019. Held under the banner and special hashtag #wiki4women a project titled “Women hidden from history”, the “Edit-a-thon” sought to raise awareness of women who are often overlooked or concealed from world history.  Volunteers collaborated on editorial projects that documented women and their stories through the translation of articles on Wikipedia, whilst also compiling information based on important (prominent) books and documents.

An “edit-a-thon”, which is a portmanteau of the words “edit” and “marathon”, is an event for content editors to work on specific editorial topics. The type of content explored by editors usually includes basic content that is designed to train new editors. 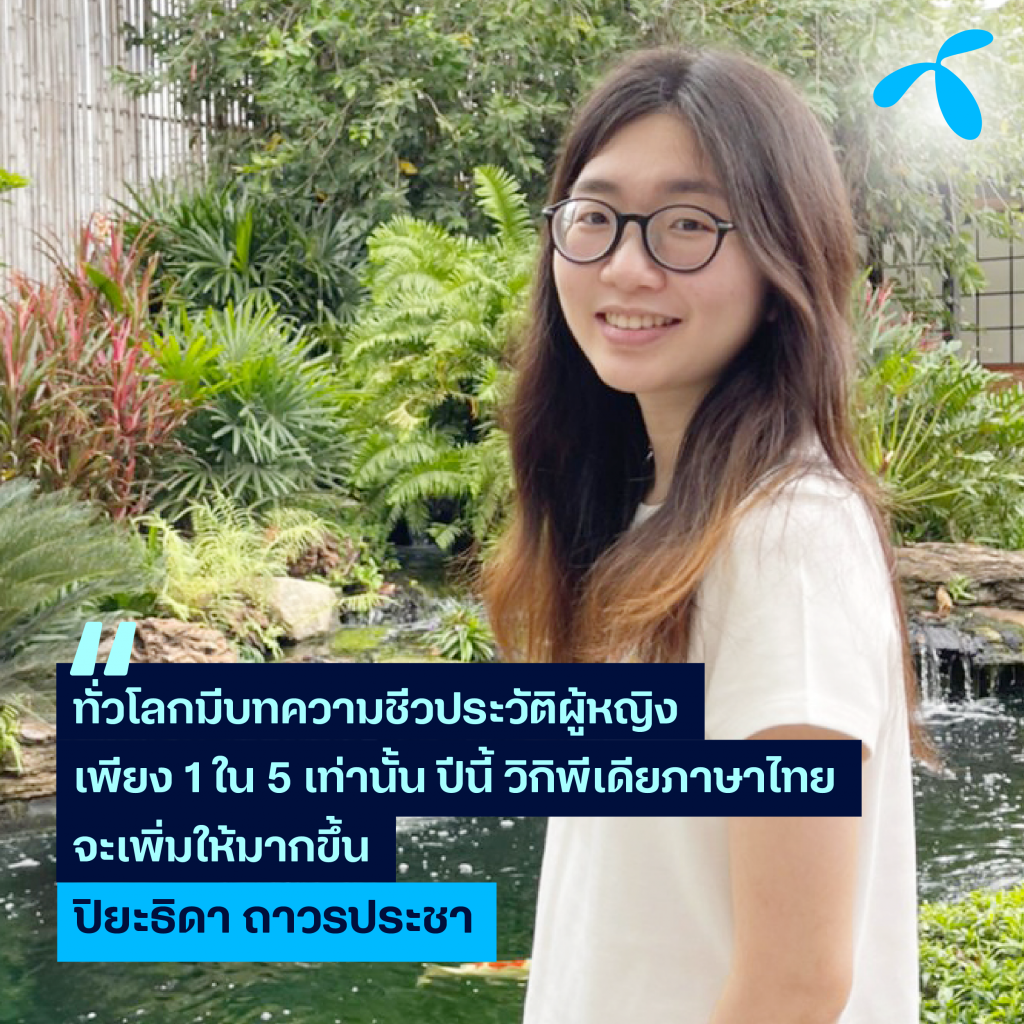 “On International Women’s Day, which falls on March 8, we will hold another edit-a-thon event, which will be held during (from) March 6-16, 2022, after (a two-year deadlock) due to Covid-19. With support from the Swedish Embassy and dtac, editors who join “Edit-a-thon” will receive a certificate from the embassy. All content will be sourced (via) online format, and needs to be at least 2,000 bytes long, or half an A4 page. Special prizes will be given to those who (show exceptional) quantity and quality in their writing. There is also a writing workshop and a translation of Wikipedia articles, which will be hosted by female speakers (over) two days. The role of editors will be open to everyone and not limited only to women,” said Dr Athikhun.

Piyathida Tawornparcha, Wikimedia Thailand Volunteer, noted that this year’s event was “WikiGap 2022, Let’s close the Internet Gap” since it was discovered that Wikipedia content about womenwas lacking, globally.  There is not much in-depth editorial online focusing on prominent women. There are a few exceptions for really famous women such as Maria Salomea Sklodowska-Curie. Meanwhile, there is still no clear information on Wikipedia about famous Thai women.

Most of the content about prominent Thai women is not in the Thai language script, but rather in English – even though they are Thai women. Globally, people’s biographies mostly focus on men with women accounting for only one-in-five of these biographical articles. Hence, we will focus on women’s biographies on Wikipedia Thailand this year. We will be open to a wide range of fields including science and engineering, sports; including golf and badminton, and the culinary industry. etc. The Wikipedia “Women in Red” project, which addresses gender inequality, estimates that there are at least 900 missing biographies about success of Thai women and other related issues, stated Piyathida.

Dr. Athikhun added,”Creating Thai content helps to reduce the accessibility gap caused by language barriers. In 2023, content both in Thai and English will be expanded. We view Wikimedia and volunteers as being the (a) link to international organizations. Thai volunteers who are proficient in foreign languages can create more local content and increase the equality of access to information.”

Assoc. Prof. Dr. Taweetham Limpanuparb, a consultant to Wikimedia Thailand, commented that “in the past, there was no meeting of participating editors. Different people edited and shared their interests. Then, the 2011 International Forum was created at an international conference in Israel, in which it was found that there should be face-to-face meetings between editors for community expansion. This would spark or trigger new topics of interest and attract other users with different areas of expertise to share and to increase the variety of content, both in quantity and quality. This should also impact on the frequency and retention of users,” he said.

He acknowledged that the rapid development of technology has resulted in “text” data moving towards multimedia content. This has led to a decline in ranking and popularity for Wikipedia, globally.  In Thailand, Wikipedia’s ranking for local users has moved out of the top ten. Search engines that retrieve data from Wikipedia to show results on the web, also reported a loss of online traffic.

Wikipedia’s “Edit-a-thon” event will strengthen relationships and expand the circle of users, both in terms of gender diversity, age and content, in order to create diverse, complete and objective information. This will be achieved with the assistance of dtac advocacy partnership, an organization that puts diversity and inclusion at the heart of corporate culture.  Collaborative projects with network parties, as well as educational institutions will attract a wide range of experts and young people, said Assoc. Prof. Dr. Taweetham. 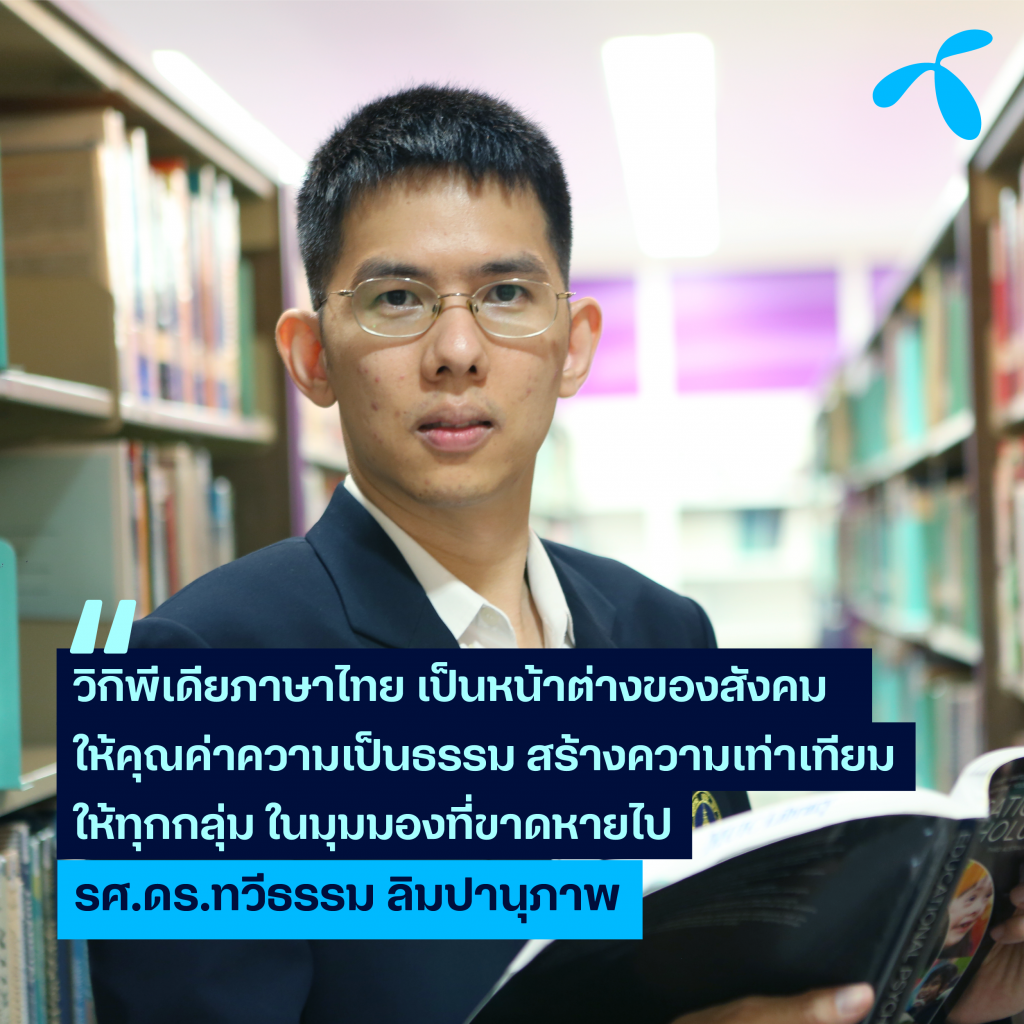 The lifeblood that nourishes the stream of knowledge

Assoc. Prof. Dr. Taweetham considers that in developed countries there will be many reliable sources of information and Wikipedia may be a supplementary source there. For Thailand, however, reliable sources are few and far between – even for information about schools, temples, and hospitals. If an organization does not have its own website, the data will be displayed on Wikipedia until it is a mirror site for government information. As a result, Wikipedia serves as a vital blood vessel that nourishes many people. There are around 100,000 registered Wikipedia users in Thailand. If you look at the number of users who come to edit and share, it will drop by leaps and bounds to only a few thousand. As for those who use the platform continuously over the course of a year, the number will drop exponentially to a few hundred cases. Thus, Thai Wikipedia plays an important role as a lifeblood of reliable information sharing, providing a window on Thai society, whilst valuing fairness and reducing inequality. We are an open and inclusive community for the marginalized, gender-sensitive people, whether female or LGBTQ+, elderly or in ethnic groups, etc. We seek to provide an opportunity for these communities to share their important issues with equal access to complete, diverse and impartial information.

When international tourism stopped, this retired Batik pioneer from Phuket went online to save local handicrafts