20 September 2022 – Amidst the increasing call center and SMS scams, consumers are avoiding taking calls from unfamiliar numbers. However, have you ever wondered why we still receive SMS and calls from scammers non-stop, even though mobile operators, police and NBTC are taking serious actions with them?

The dtac Anti-Scam Task Force reveals its strategy includes a Fraud Management system and the use of RPA (Robotic Automation Process) technology to track and identify call center scammers, leading to apprehension by law enforcement.

Deep Dive in How We Catch Scammers

dtac Anti-Scam Task Force compiles and analyzes multiple sets of data including complaints from our customers, data on call volumes, and network congestion which is then correlated to identify phones used for scamming. The task force is regularly reviewing its criteria to identify any missing links and improve its identification and suspension processes.

When a phone used by a scammer is identified, all other numbers using the device are also suspended to minimize future threats. The task force is identifying proactive systems / controls to minimize the spam to its customers and involves a continuous process of improvement.

Next, the details that have helped to suspend numbers can then be used to pinpoint the location of call center scammers. Initially, dtac found that after such analysis many scammers operate close to the border. Scammers then developed more sophisticated call scamming tactics which are very easily available in the marketplace. This is their attempt to hide their digital trails, such as alternating calls using domestic and overseas numbers, or alternating calls and texting.

The dtac task force is also reviewing practices of its retailers who sell SIMs to spammers in order to take corrective or legal action as necessary while also reviewing the packages and plans used for spam.

There are numerous challenges to identifying spammers/ scammers.  For instance, the behavior patterns of spammers can be hidden with the help of modern equipment that can spoof their location, equipment details such brand, make, model, and their identity. When addressing the constantly evolving scam environment, the dtac task force treats customer privacy as a primary concern by ensuring its techniques will be non-intrusive to customer privacy while also protecting its customers from possible spam.

The dtac task force involves other major stakeholders in preventing scams, such as by reporting the identities of the devices used in scamming to the NBTC and Thai Customs Department, which will in turn be blacklisted from import into Thailand. 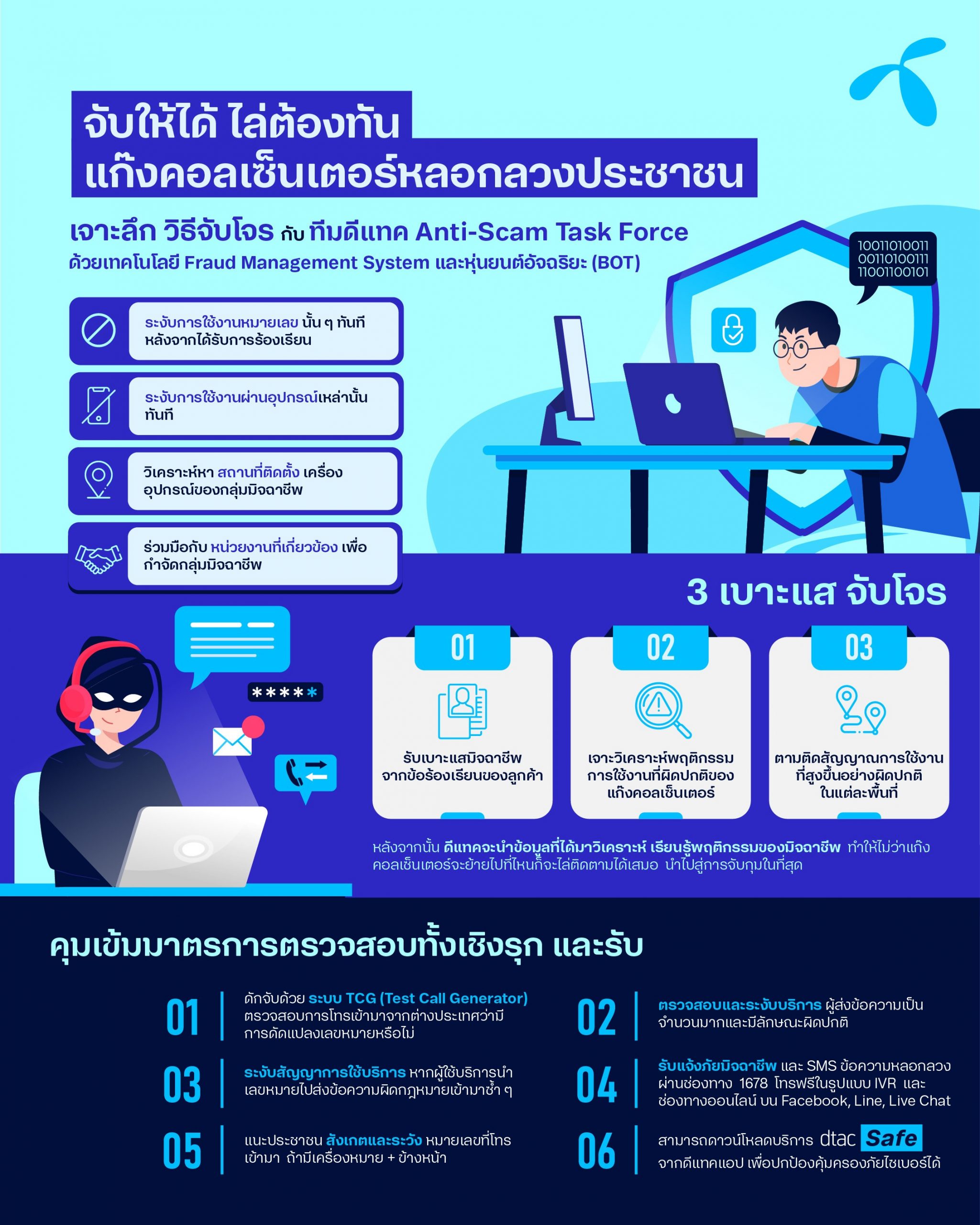 dtac Alert Customers On How To Spot Scammers