After months of working closely with Thai startups in dtac accelerate batch 7, we already know which startups have been granted the opportunities from us in early September. However, we still want to highlight some of the newcomers who share one mutual intention, which is the hope to make society better by their innovations.

The following are five startups that you might want to keep an eye on because they are not only solving the social problems but also your daily difficulties, too.

Arincare: A Startup that Tackles Medicine Prices and Patient Overcrowding

The one and only startup from batch 7 that received both the Best Performance Startup and the Popular Vote awards, Arincare started with a goal to deal with one of the biggest problems in Thailand such as the overpriced medicine in private hospitals, the patient overcrowding, and the time patients have to wait for their medical supplies.

Seeing these relentless problems as well as the opportunities to improve the quality of life for Thai people, Arincare came up with the idea of e-prescription. The startup works with the Ministry of Public Health and the Ministry of Digital Economy and Society. Their collaboration allows patients to pick up their supplies from nearby drugstores instead of waiting for hours at hospitals. According to the research, just the process of waiting for medicine can take up to 154 minutes. Arincare also deals with the overpriced medicine problems, which sometimes skyrocket to 300 – 8,000 percent above average rates based on the statistics from the Department of Internal Trade.

Once the network in the area is set up, the e-prescription system is linked with nearby drugstores. Patients will pay at more reasonable prices. It also prevents problems such as losing prescriptions or falsified details. On the doctors’ side, they can easily check if their patients have collected the necessary supplies.

Until now, Arincare has launched the pilot program in Prachinburi and Rayong. The team believe that their intention and dedication will allow them to expand the system to all over the country within 2019.

One of the winners of the Best Performance Startup, FinGas wants to be a marketplace for anyone who uses cooking gas regularly. Users can order the gas via FinGas application or Line@. The algorithm will match with the nearest gas stores that can fulfil the order, ensuring the gas will be delivered to the users right on time.

FinGas began their pilot service in Chiang Mai. After a month of trial, the application was downloaded 5,700 times, and gas was successfully ordered and delivered over 2,500 times, making almost a million baht from charging 5 percent transaction fee.

However, FinGas didn’t stop at that. The team goes beyond this by seeing their platform as a tool to help street food vendors who usually have problems with business loans. Because not all of them have a proven record of financial income, banks have to deny their request. As a result, the vendors have to go to loan sharks who charge 120 – 360 percent interest rate per year. That’s why FinGas has a vision that the history of gas order could be used as evidence when requesting business loans.

Due to their vision, this gas ordering platform aims at solving the country’s economic problems by helping street food vendors access loans through credit scoring based on the amount of gas they use. And this will decrease the problem of predatory lending. 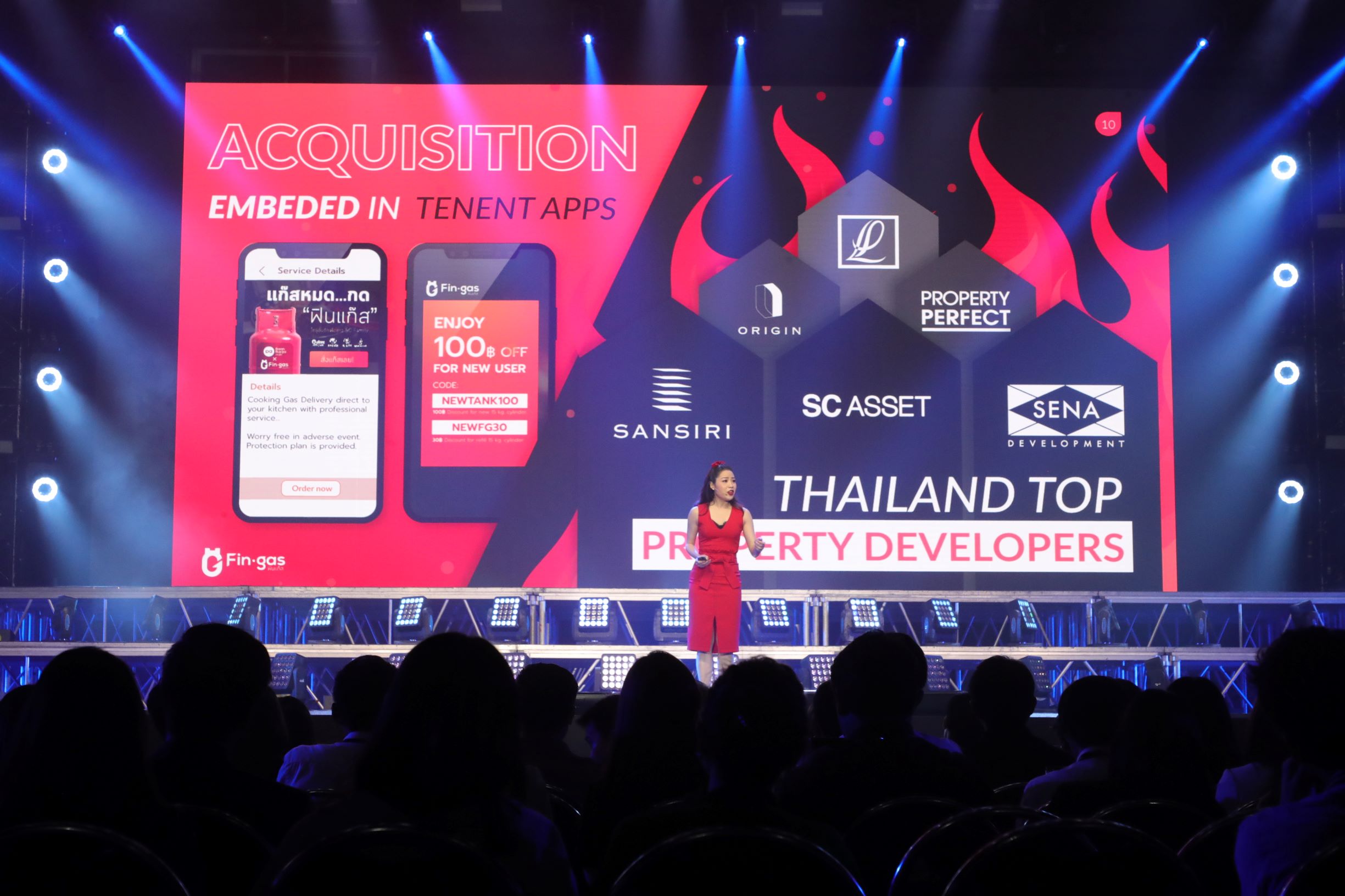 If machines are the heart of factories, System Stone is probably considered as an application that will specifically take care of the heart. The application deals with the pain point: high costs in machine maintenance.

System Stone uses IoT and AI to allow engineers to estimate machine deterioration. Being able to plan in advance saves cost and time because it avoids the situation when production lines have to stop because of broken-down machines.

Having a few other features necessary for factory management, System Stone is like an online assistant that engineers would love to work with. It cuts out some processes, saves a lot of paperwork, and, most important of all, saves time for engineers.

To emphasize their vision of making this application as a tool to support the digital workforce era while improving the quality of work in this industry, System Stone offers their program and application to small businesses for free during their first phase. In this present moment, there are more than 300 small businesses using the application to manage their systems more efficiently. 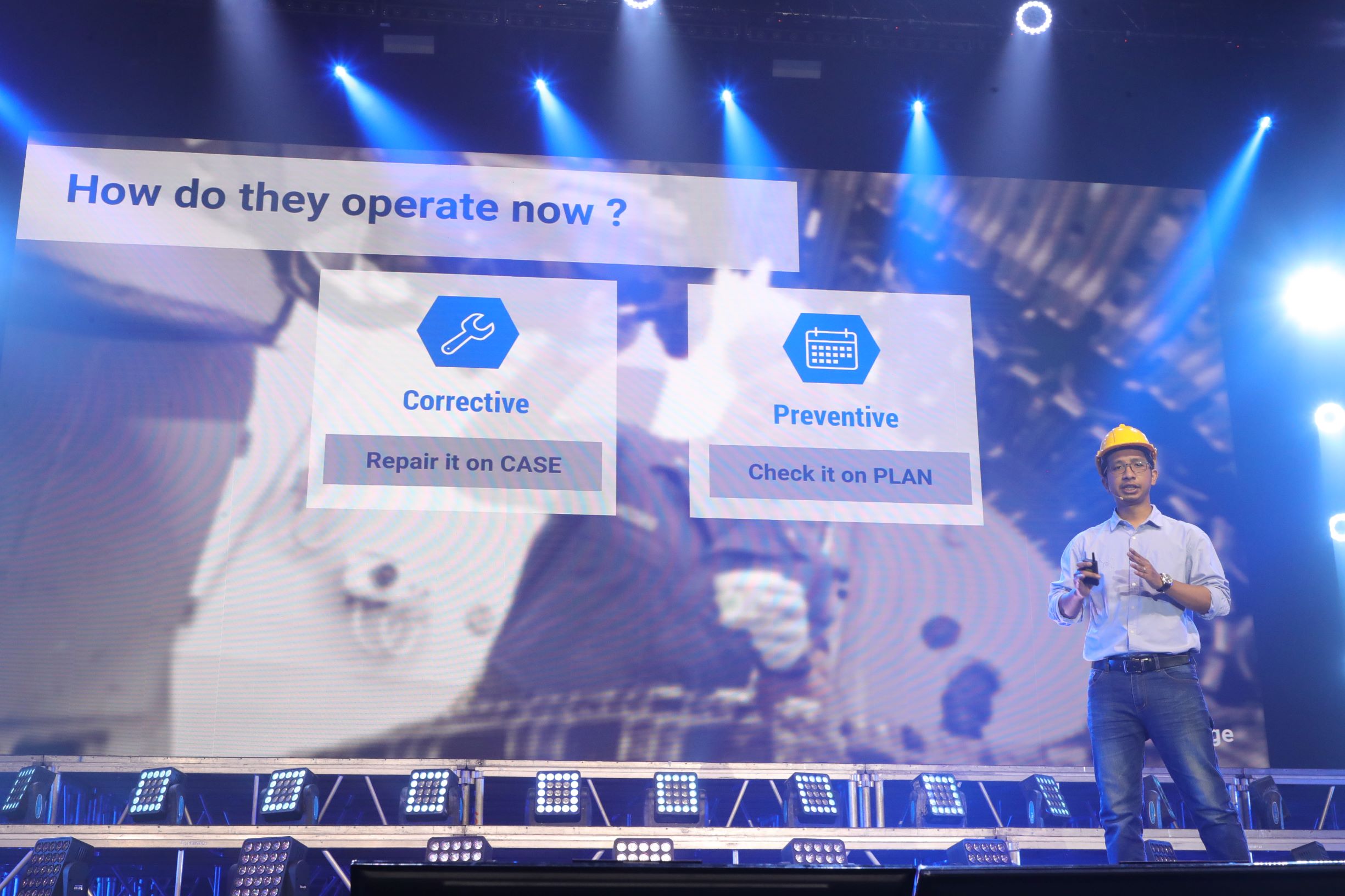 Skooldio: A Startup that Believes in Life-long Learning

If 5 million Thai people will lose their jobs in the next 10 years because technology is taking over, what can you do to avoid being one of those people?

Skooldio is a startup that answers this question at the right moment by allowing people to learn the necessary skills that will become more and more important in the future. Many skills required in the job market aren’t appropriately taught in colleges. These skills are cloud computing, artificial intelligence, team management, UX design, and smartphone application developing.

Based on their belief that everyone can learn, no matter how old they are, Skooldio designs their learning program for both actual classrooms and online classrooms. Their instructors are some of the best in their fields. Their lessons aim to equip every student with practical skills in need of the job market in this digital era. 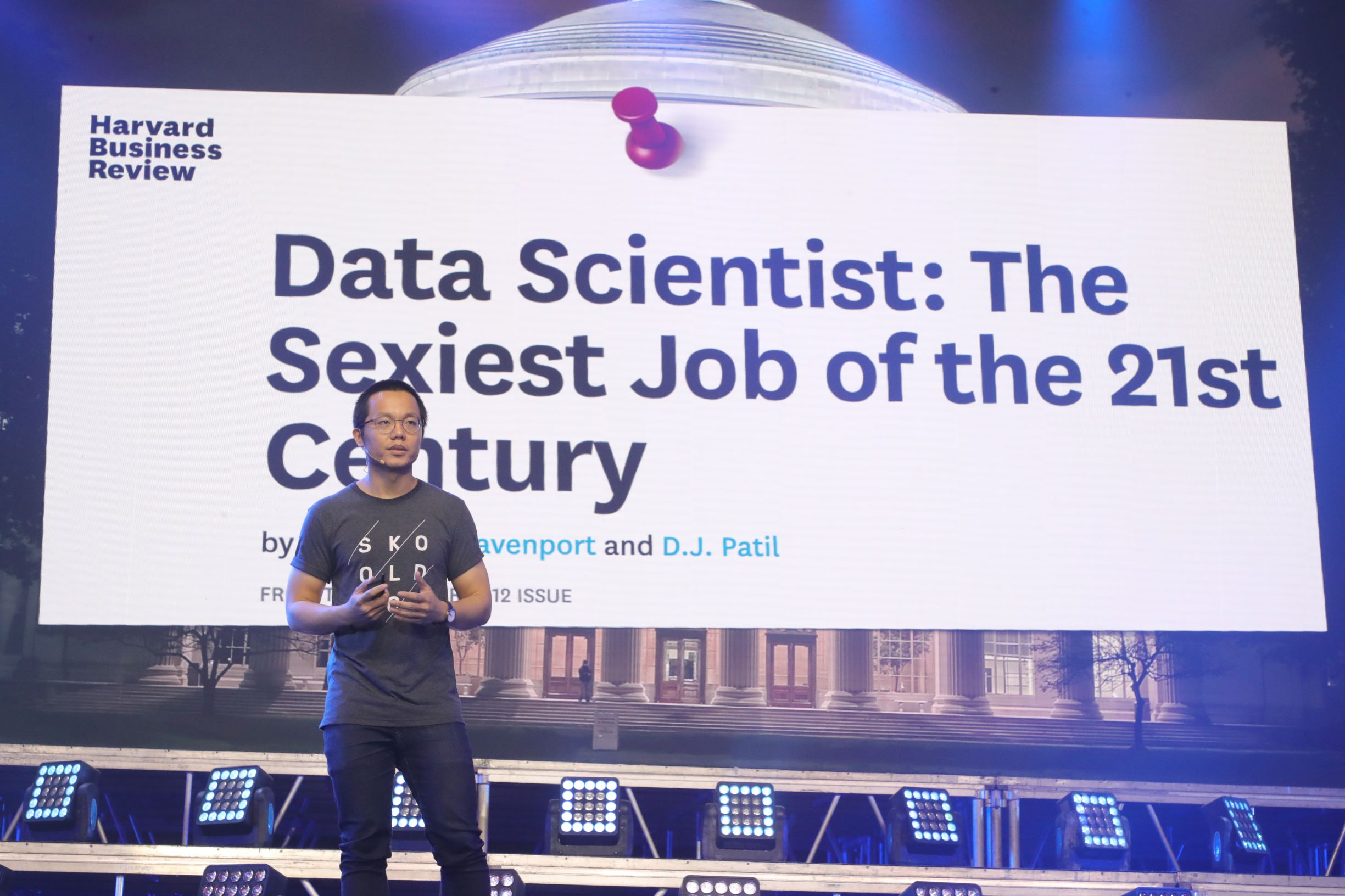 ViaBus: A Startup that Has Saved Over 5,200 Million Minutes

According to the information from Kasikorn Research Center, people in Bangkok spend 35 minutes or more just to get from one place to another place. If converting time spent to the opportunity cost, the number has reached 11,000 million baht per year or about 60 million baht per day.

The good news is the number could be lowered if more people used public transportation. But the bad news is a large number of people still prefer using their personal cars because it’s easier to estimate their time on the road, especially waiting time. Knowing what the pain point in this issue is, ViaBus decided to deal with this problem by positioning the application as a platform that connects all methods of public transportation, being a more convenient solution for users to access the information and estimate traveling time.

ViaBus covers a wide range – if not all – of public transportation, including buses, BTS, MRT, boats, minibuses, and vans that run between cities. The service is available in over 20 cities. It benefits not only Thai people who rely on daily transportation but also tourists who could use this application as a traveling assistant.

Until now, this Best Performance Startup application has over 1 million users. It has saved over 5,200 million minutes which is equal to 3,300 million baht in economic value. 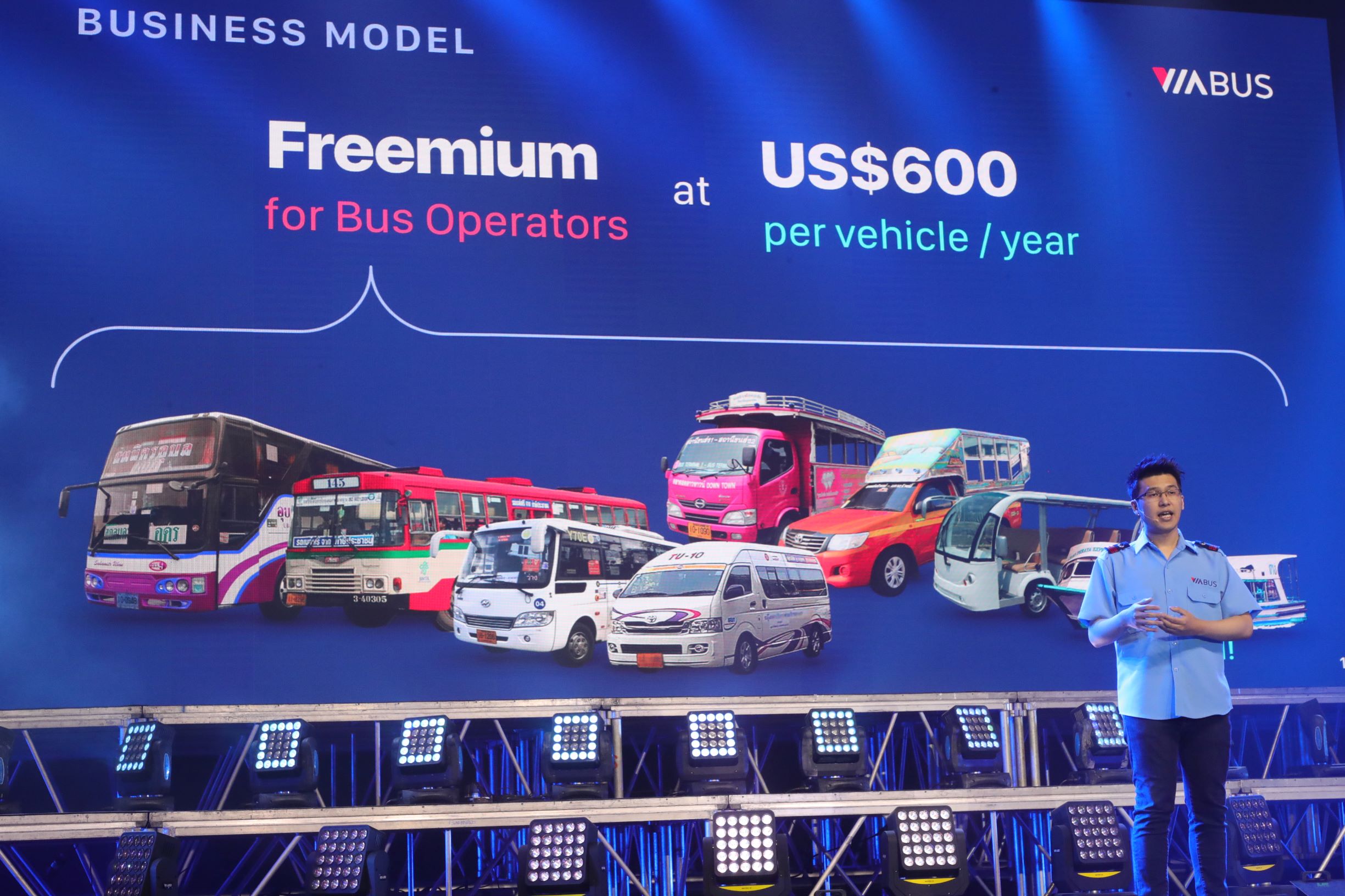 Building the future of manufacturing with tools powered by 5G networks

The Top Business Competition That’s as Tough as a Triathlon