27 May 2022 – Not just in June of every year, and not just in Pride Month, or the month for supporting LGBTQ+ gender equality around the world, every day is “Sansiri Equality” day. In 2022, Sansiri is determined to constantly equate equality as the new norm – as the first organisation in Thailand and one of the top 200 companies worldwide who has signed the UN Global Standards of Conduct for Business contract – by joining hands with “dtac” and “Unilever”, both partners that are golbal model organisations in regard to equality, to further advance the “Live Equally… We Are Equal, I Am Equal To You” campaign under the support of UNDP for the third consecutive year. This cooperation is meant to push for the creation of new norms in support of equality and diversity, both in the organisations for the employees and the Thai society, and to together lay out a 3-year roadmap to “build a society where equality becomes a standard in all dimensions”. 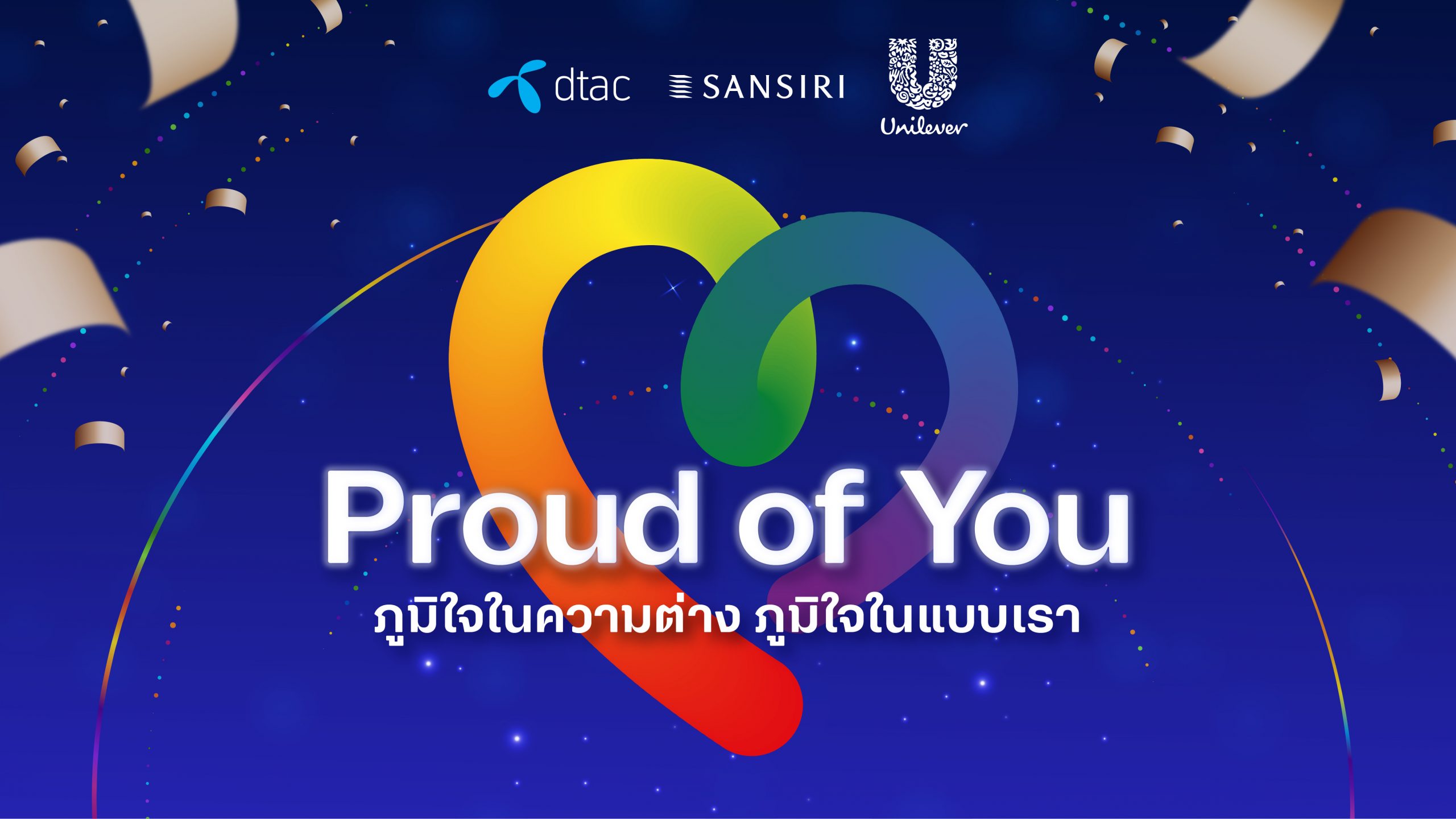 Mr. Srettha Thavisin, Chief Executive Officer and President of Sansiri Public Company Limited, said, “Sansiri firmly believes that every dimension of life is about equality. We take this commitment seriously and are constantly advancing toward this direction, by becoming a bridge to connect friends with the same vision, to promote equality in all dimensions and the diversity in the Thai society. In this year, Sansiri would like to thank allies who also value ​​equality and diversity that the world has begun to focus on. We hope this cooperation will play a part in inspiring other sectors to open up to accept diversity in the society and to create equality in all dimensions so much so that this will ultimately become social norm.”

Over the past six years, Sansiri has been the country’s leading real estate company committed to promoting equality and openness to diversity in a concrete manner within the organisation covering employees as well as their families. It is the first organisation in Thailand, and one of more than 200 leading companies around the world, such as Microsoft, Google, Coca-Cola, Netflix and Nike, to have signed the UN Global Standards of Conduct for Business, as supported by UNDP, widely opening recruitment to LGBTQ+ employees and promoting equal work opportunity. Most recently this year, more benefits have been announced for diverse employees in the organisation. This included marriage leave of not more than 6 days per year, gender affirmation surgery leave of not more than 30 days per year, life partner’s funeral leave of not more than 15 days per year, and leave to care for life partners and adopted children of not more than 7 days a year. The benefit plan also covers alternative vaccines, health insurance, etc., for employees’ life partners.

Another important aspect is the push for equality from within the organisation to the level that will become a new norm in the Thai society through working with partners from various leading businesses, SMEs and global businesses that share the same vision, including equal acceptance of LGBTQ+ people in the workplace and advocating concrete policies in the organisation toward the equality for everyone, including customers to own a home easier. This means a collaboration with eight leading bank partners to open up the equal opportunity to all couples to own Sansiri homes (Financial Inclusion). The equality of SMEs who were affected by the economy, is a matter that should be supported by every sector, as well as the equal access to investments for everyone at all levels. Most recently, two prestigious awards given to Sansiri were a clear testament to the Company’s full commitment to equality. These awards were the “Human Rights Award – Special Mention” given by the Rights and Liberties Protection Department, Ministry of Justice, and the “Network Organisation Award for Promoting Gender Equality” bestowed by the Ministry of Social Development and Human Security.

Mr. Renaud Meyer, Resident Representative of the United Nations Development Programme in Thailand (UNDP Thailand), said, “UNDP is pleased to see Sansiri reaffirming its commitment to diversity, equity and inclusion and to mobilise new partners like dtac and Unilever to mainstream these values and principles in companies and through them in the Thai society. UNDP will continue to support this key issue alongside the business sector in their efforts to promote diversity and inclusion in the workplace including for LGBTI people so that no one is left behind in the achievement of the Sustainable Development Goals.”

Mr. Sharad Mehrotra, Chief Executive Officer of Total Access Communication Public Company Limited (dtac), said, “At dtac, we uphold the highest standards for human rights, which include fostering diversity and inclusion for our employees and the communities we serve with mobile connectivity. We have long been committed to inclusive policies such as a six-month maternity leave that we launched in 2016 and equal employee benefits for same-sex couples, which we launched in 2021. By partnering with Sansiri and Unilever, and with the support of the United Nations’ Development Programme, dtac’s ambition is now to inspire more organisations in Thailand to embrace diversity and inclusion as core business principles. This is reflected in dtac’s operations in three dimensions. First, the ‘#Inclusivedtac’ initiative promotes equality and diversity to enable all our employees to be their best self. Secondly, the ‘Good for All, Good Together’ business plan ensures people with disabilities can better access connected digital services. Thirdly, the ‘Safe Internet’ programme empowers our youth to make full use of the cyber world, while protecting themselves from online threats. The programme is both a camp for children and a ‘Concerted Actions to Stop Cyber-bullying’ curriculum for teachers to use as a handbook to stop cyber-bullying in schools.”

Mrs. Nattinee Netraumpai, Head of Corporate Affairs of Unilever Thailand, said, “Equality is the ideal that individuals are equal, while Equity is the means to achieve fairness. As a company, Unilever has a choice to be equitable. This is why we are prioritising identifying structural barriers under-represented groups face and providing sustainable mitigations through our policies, practices and measures. Unilever has changed our practices in advertising, in talent recruitment, in assessment of performance & potential, in career progression decisions, in remuneration decisions and in development experiences to surface practices which adversely impact certain groups over others. We are working to design equitable workplaces that support, empower and recognise the fundamental dignity and worth of people from all identities, backgrounds and walks of life. Unilever Thailand has up to 66 percent female mid-level managers, has engaged with 131 diverse SMEs which is 51 percent or more owned, managed and controlled by members of diverse groups, i.e. women, LGBTQI+, people with disabilities, or ethnic minorities, to support access to skills, funding sources, and business networks through SMEs development projects to enhance the ability of SMEs to be selected to become business partners with Unilever. Unilever commits to raise living standards across the value chain, creating opportunities through inclusivity and prepare the community to the future fit of work through supplier diversity program. We believe that Equity is the outcome which ensures Our Success is powered by the Diverse Opinions, Skill Sets & Life Experience of our Employees and partners.”

The long-term 3-year mission in which “Sansiri”, “dtac” and “Unilever” cooperate to together push for equality in every dimension of the Thai society, consisting of: Year 1, short-term goal:    To participate in activities involving “Diversity & Inclusion” organised by UNDP, namely, “Roundtable Discussion on LGBTI Inclusion in Thai Business: The Economic Environment” and other knowledge-sharing and case studies that each organisation has begun to implement to serve as a guideline for the development in regard to equality, as well as participating in public forums and forums involving relevant government agencies, such as the Securities and Exchange Commission (SEC), the Department of Labour Protection and Welfare, Ministry of Labour, to push, extend and create an ecosystem on equality. Year 2, medium-term goal: Applying knowledge to create definitive and common practices such as welfare for diversity, Connecting supply chain to promote equality for business partners, contractors, partners, etc. Participate in seminars or share knowledge at public forums to create change for the business sector and the society, as well as to broaden the campaign on gender equality to other areas, such as children and youth, women, people with disabilities, as well as the elderly, and Year 3, Long-term goal: To collaborate on Diversity & Inclusion campaigns, including creating prototype campaigns that the three organisations will have initiated and developed together.

Enjoy the video on our “Live Equally” campaign together at: