dtac will always be there when Thai people needs help

The tremendous flood at Varin Chumrab district, Ubon Ratchatani province caused a major destruction to the people in northeastern area. Apart from a destruction and dispersion of their properties and belongings, affected people’ s residences have been piled with debris and dirty sediments. The piles were heavily layered that people could not even return to reside in their residences. To make the situation worsen, flood water got locked in places caused the spread of bacteria and caused many sickness to residences.

Majority of people could not restore their houses ิั themselves because the damage was in a critical level. Some of the house were totally perished in the raging stream. Part of residences were seniors and fatally-ill people who could not even help themselves. This problem was a main concern for the Mirror Foundation so they  established the house restoration mission. Their mission aimed to return people to their houses as swiftly as possible. Dtac has agreed that this needed to be the first priority, hence offered to help by cooperating volunteering project. 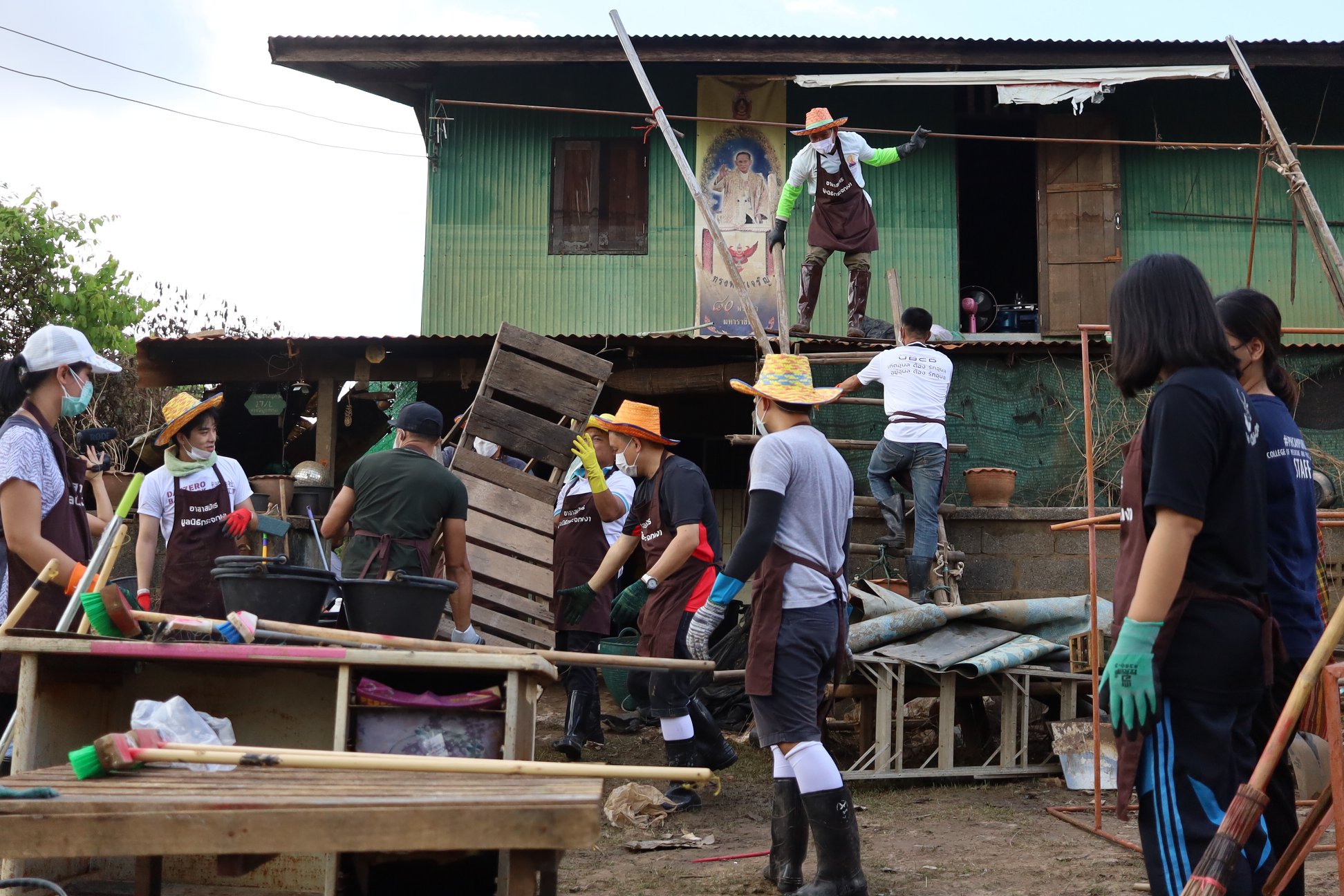 To support The Mirror Foundation’s strong endeavor , dtac established “dtac arsa langbaan” project which were consisted of three activities : money donation, unused cellphone donation but what we were proudly present were dtac employees and executives who volunteered to restore the affected people’s residences. Dtac’s volunteers were 40 people and they really put their whole effort in cleaning the houses. They aimed for people to get back to their homes as soon as possible.

Our mission has no room for weakness

“dtac arsa Langbaan” was not for the faint of heart. The Mirror Foundation specifically informed that there were no room for “weakness”. Every volunteer must be in their decent physique condition because the task was exceptionally tough. They had to carry heavy objects, working under the scorching sun and had to keep looking for objects that might fall over anytime. The mission was to actually help not “for showing off on social media”.

With the volunteering spirit in their hearts , 40 dtac volunteers work tirelessly to accomplish this mission. No ranks or positions were matter as they altogether picked up the cleaning instruments and did their jobs with full effort. Along the process, some of them wondered why The Mirror Foundation assigned them to do one house at a time before moving to another. They thought that if they spread the force, they could accomplish the mission faster but as they begun to work, they realized that restoring one house was already a tough task. They need to put the full force in one spot first before even move to another. The plan they have in minds must resonate with the real situation. 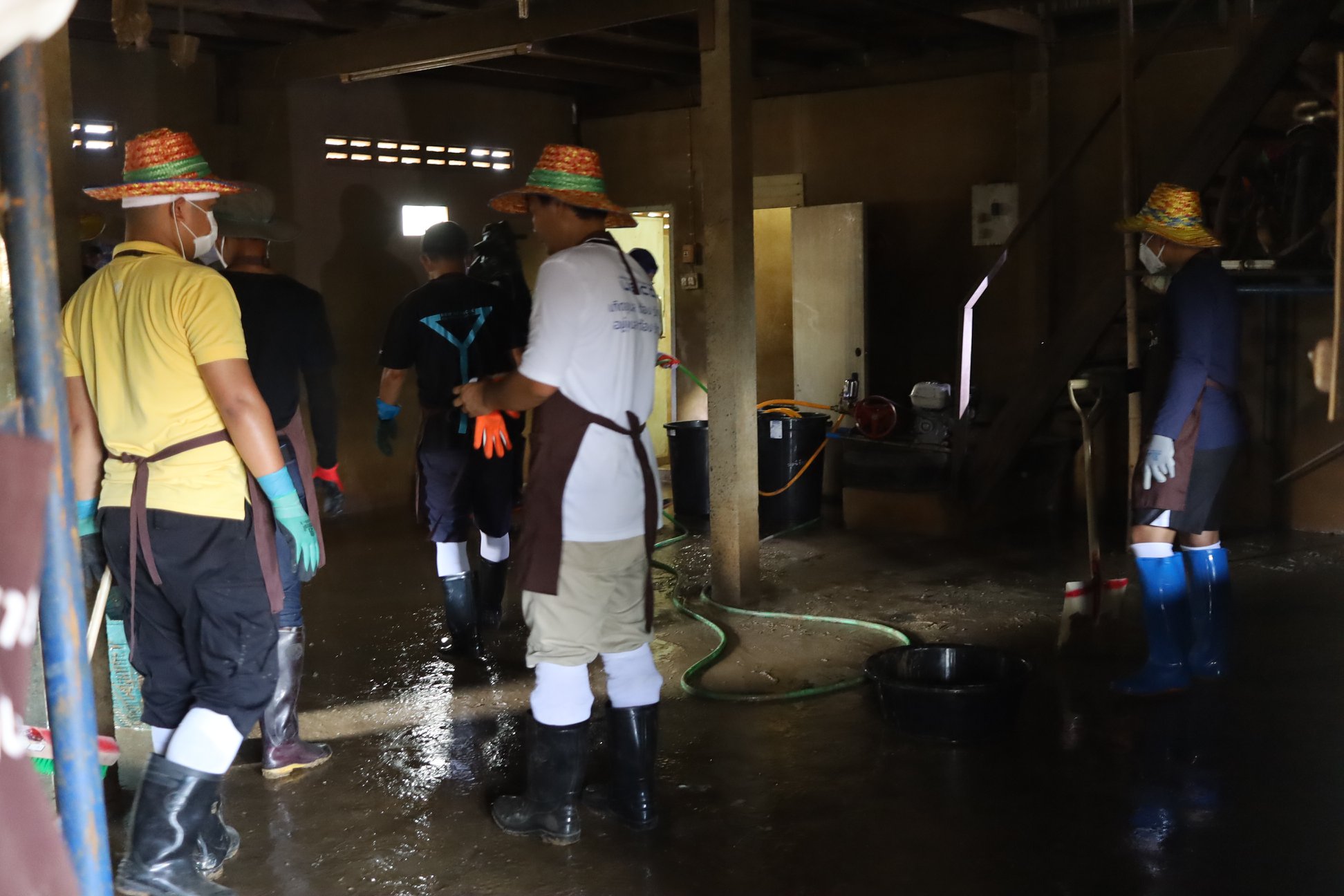 Ranks and positions don’t matter, we are all for one.

What was extremely crucial for the volunteers was to protect themselves from germs and bacteria. After the flood, water was locked in  numerous places and full of germs and bacteria which caused great sickness among people in the area. All the volunteers were required to wear gloves, boot and must always wore protective masks. They must not touch other parts of their bodies with gloves on, even when they were to drink water or take off their masks, these need to be done by others.

No matter how hard and tiresome the mission was, dtac volunteers achieved the goal beautifully. They were there for three days since 9-11 October and were able to restore 5 houses and one all-purpose local hall. This was true success and people could actually return to their residences. This mission could be achieved without strong determination from dtac volunteers.

“The first house we restored  belonged to senior citizen who suffered from kidney complication. The owner’s offspring was actually a local volunteer. He told me that he had nothing to thank us but from the way I thought, this was a reward paying back to him from the time he was a local volunteer”

“I was completely tired but I felt fulfilled and proud because I got all my dtac people here with me along with our CEO and CxOs. I aimed to tell the experience to my colleagues, to inspire them to be volunteers next time.”

“If you are traveler, you will remember but if you become a volunteer, you will be remembered”

“I watched the flood news and I felt terribly touched. I saw that people had to ride a motorcycle from their homes to the occasional toilet but when I reached the area, I felt even more sad. They could not even reach their home. That was not a good quality of life and we could not tolerate to have this in our society.”

“It was a tiresome task and I was  not  young as I was before but when the house owner came to thank us, I truly felt appreciation from them”

“If our society could help this much on any unfortunate incident, everything will be much better. I was happy to help them. Mark my word, If you are traveler, you will remember but if you become a volunteer, you will be remembered ”

How a mobile operator, a university, and a data expert harness the untapped potential of mobility data to rebuild Thai tourism and promote social good