The more advanced digital technology is, the severer online threats become. Ranking among these intimidating threats is “Online Child Exploitation”, which is considered a form of human trafficking. It is a grave crime because it hurts the rights, liberties, dignity, and security of another human.

To mark National Children’s Day 2023, dtac Safe Internet would like to bring the following four terms to the attention of children, youth, and their parents so that they get some ideas about how the ill-intentioned have lured their young victims on the internet.

This term means tracking someone online. It may be in the form of just monitoring someone’s activities based on their online movements or the physical act of trailing victims to their homes. At present, such activities are not considered crimes in Thailand. This is because victims are just monitored. No clear damage has been done yet.

This term talks about the process via which perpetrators build relationships with children. During online grooming, they communicate with their young targets online or over social media with aims to lure, control, or encourage them to engage in sexual acts. They may finally come to children’s places or arrange a meeting where sexual acts are performed. Or they may just sexually violate their young victims online.

Perpetrators usually target vulnerable children such as those without self-confidence or those who feel lonely. To groom young victims, they first respond to their needs. For example, they shower targeted children with attention and gifts. Later on, they will manipulate, control and teach them about sex. Over time, children will feel used to sexual content and engage in sex.

This term is a combination of two words, Sex+Texting. When children or teenagers create, share, and forward content that is suggestive of nudity or near nudity via cell phones and/or internet, they do Sexting. Often, youngsters share such content with their sweethearts or trusted friends.

Sexting, so far, is also used by perpetrators. After choosing their targets, they send or share their sexual texts/images in hopes that targeted children will respond in kind. When they get the still images and/or video clips of children’s bodies or sex organs, they forward them to the like-minded. A research by the United Nations Office on Drugs and Crime (UNODC) shows that 88% of children-related sexual content comes from the online world. It has been uploaded onto websites because young victims are unaware of their perpetrators’ ill intention.

This term means Sexual Extortion. In other words, victims are forced to fulfill sexual needs, give money or other valuable items, or produce sexual materials with sexual threats. Sexual Extortion happens mostly because young victims know they have less power. Perpetrators thus are able to threaten or force children to answer their demand. For example, children may be forced to send more pornographic images, yield to sexual abuses, or give up money. When extortion goes to the point of torture, some victims will become suicidal as they believe death is the only way-out.

Why Does Online Child Sexual Exploitation Pose a Social Problem?

It is because “victims” may be your child or grandchild. According to the Royal Thai Police, up to 20 per cent of Thai kids risk being sexually exploited. At risk are not just girls but also boys. Furthermore, such exploitation has reached not just the vulnerable but netizens of all social/economic classes. In other words, even the affluent may fall victims too. Importantly, between 10% – 31% of children (aged 12-17) who had experienced online sexual exploitation and abuse in the past year did not disclose the most recent incident to anyone.

The research titled Traumatic Impact of Child Sexual Abuse: A Conceptualization has found that young victims have developed Traumatic Sexualization or inappropriate shaping of sexual behaviors. For example, they become promiscuous or use sex to get what they want. Other emotional injuries from sexual abuse are “the feeling of being betrayed” by adults and rebellion. Moreover, victims often suffer from the feeling of powerlessness and stigmatization.

So, let’s protect our children and grandchildren by boosting their immunity with dtac Safe Internet! 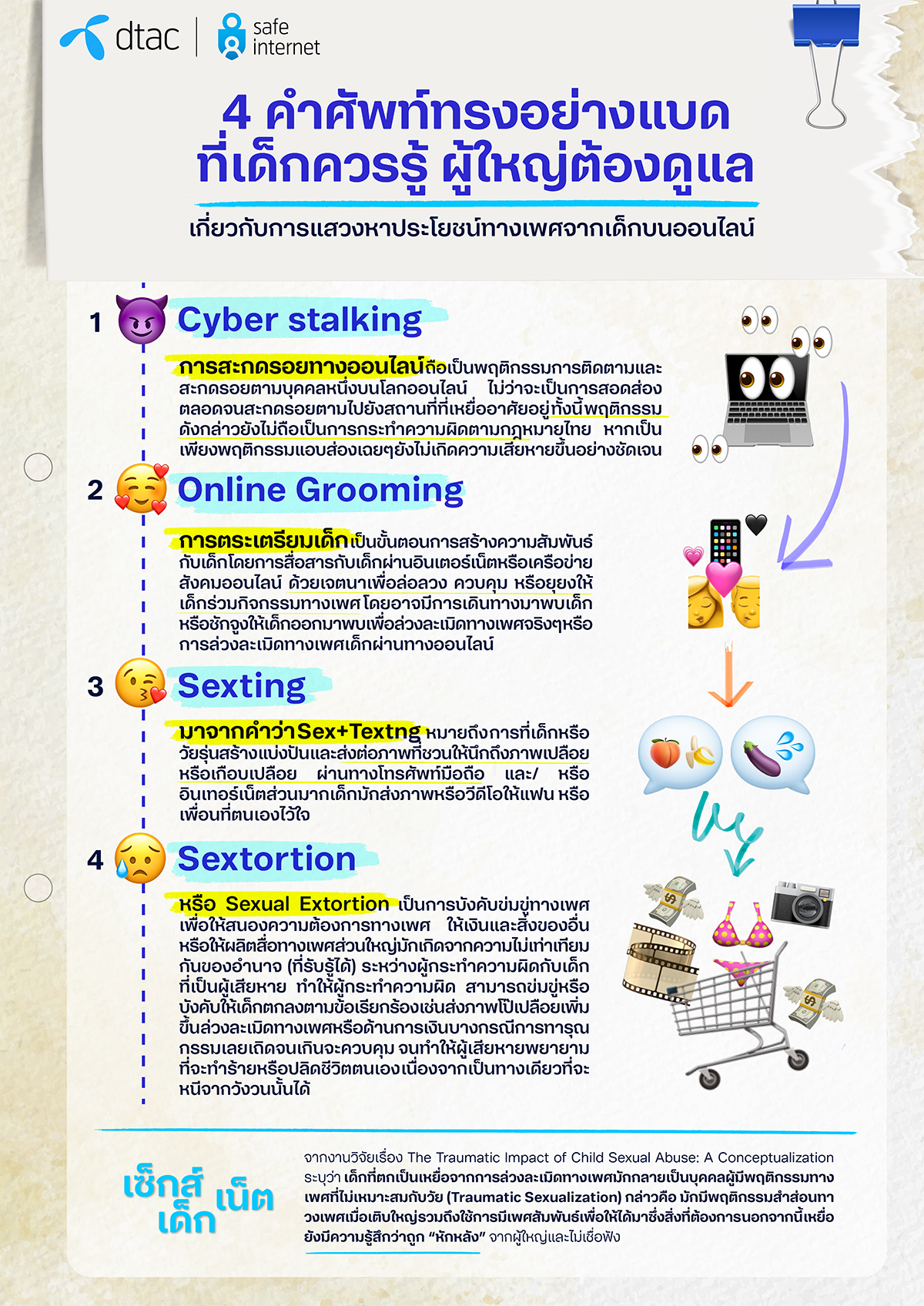